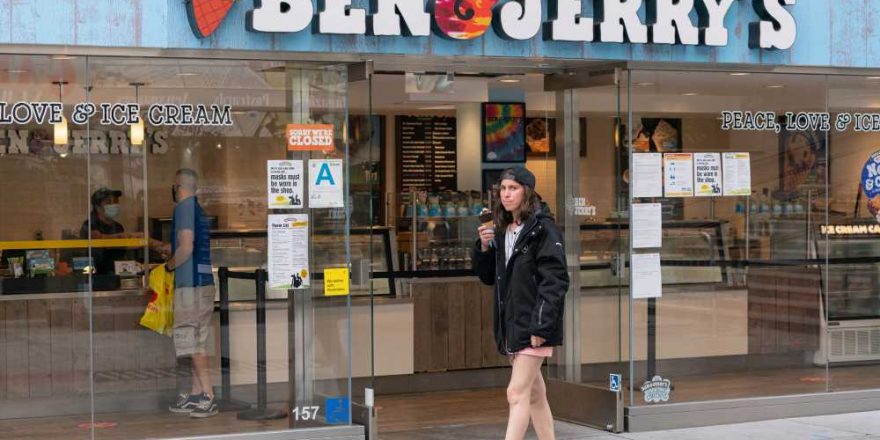 A longtime Ben & Jerry’s contractor publicly announced she would no longer work with the ice cream company after its decision this week to halt sales in Israeli-occupied territories.

“Effective immediately, I have quit my job of 21 years at Ben & Jerry’s, over the statement on Israel,” the employee, Susannah Levin, said in a Facebook post on Tuesday.

She added that “anti-Zionism IS the new anti-semitism.”

“My company’s response is part of this despicable trend and I will have no part of it,” she said.

Levin’s LinkedIn page adds that she was an Albany, NY-based freelance graphic designer for Ben & Jerry’s since 2000.

Her decision came after the Vermont-based ice cream maker caved to pressure by online protesters and announced the sales ban on Monday.

A representative for Ben & Jerry’s declined to comment on the matter.

The company announced earlier this week that it will let its partnership agreement with its Israel-based licensee lapse at the end of the year.

“We believe it is inconsistent with our values for Ben & Jerry’s ice cream to be sold in the Occupied Palestinian Territory (OPT),” the company said in a statement.

The term Occupied Palestinian Territories has been used for years to describe the areas occupied by Israel since 1967, namely the West Bank, including East Jerusalem, and the Gaza Strip, according to the European Council on Foreign Relations.

Ben & Jerry’s clarified that it’s not pulling out of Israel, where it will continue to sell ice cream “through a different arrangement.”

The move drew ire from Israeli politicians, kosher grocery stores in the US and elsewhere, and US lawmakers.

Israeli President Isaac Herzog on Wednesday said about the announcement that the “boycott of Israel is a new sort of terrorism, economic terrorism.”

In the US, Republican Sen. James Lankford of Oklahoma called for a ban on all Ben & Jerry’s sales in his state, saying it would be in line with state laws.

The London-based consumer goods giant Unilever, which acquired Ben & Jerry’s in 2000, has sought to distance itself from the announcement, saying that the decision was made independently by Ben & Jerry’s.

“Unilever remains fully committed to our business in Israel,” Unilever CEO Alan Jope said Thursday on a conference to discuss its second-quarter earnings. “This was a decision that was taken by Ben & Jerry’s and its independent board in line with an acquisition agreement that we signed 20 years ago.”

Jope added that while the brand remains independent, the company does not intend to make an announcement “quite as fiery as this one” every quarter.

But with this week’s announcement, the company already risks alienating customers, investors and even its own staff.

The matter was discussed briefly at an all-hands meeting of Unilever’s beauty and personal care business unit, according to images of the Microsoft Teams presentation that were shared with The Post.

In the meeting, the company reiterated its stance that the announcement was made independently by Ben & Jerry’s, and that Unilever stands by its business operations and relationships in Israel, according to a source who was at the meeting.

And Jewish employees of Unilever have been discussing the matter in a private group chat, with some expressing frustration over Unilever’s handling of the situation, the source said.

And in the meantime, various states, including Florida and Texas, are reviewing laws to determine whether they can divest investment funds, such as public pensions, from Unilever for boycotting Israel.

There are 35 US states that have signed laws that are aimed at preventing state funds from investing in companies that boycott Israel.

On Tuesday, Israel’s ambassador to the US Gilad Erdan sent a letter to the governors of those states calling on them to take action against Unilever for Ben & Jerry’s announcement.