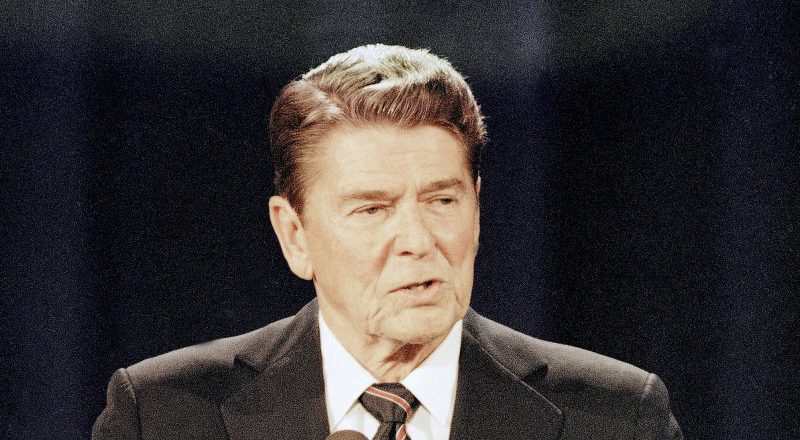 It is easy to recall the 1980s as being a boom time for the United States economy — a time of gleaming excess that, among other things, powered Ronald Reagan to a landslide reelection in 1984.

But the decade didn’t start out quite so sunny. And understanding the history of how the economy went from bust to boom in the early 1980s offers a surprising model for optimism about how the world’s largest economy could progress in the next couple of years.

All it would take is for the Federal Reserve to pull off a delicate economic pivot that is the mirror image of the one it managed four decades ago. 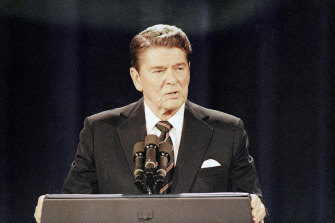 A look back at the Reagan era is a reminder that conditions can change surprisingly quickly.Credit:AP

Now, high inflation and a seemingly never-ending pandemic are depressing Americans’ attitudes about the economy. By contrast, in December 1981 — when Reagan had been president for 11 months, just as President Joe Biden has now — conditions were by most measures substantially worse. The unemployment rate was 8.5 per cent and would keep rising throughout 1982. Inflation was 8.9 per cent, and indexes of consumer sentiment were abysmal.

In an issue of Time magazine published this month 40 years ago, if you flip past a cover story that ranks the performance of Reagan’s Cabinet and an advertisement pitching a Smith-Corona typewriter as a holiday gift for your child, you see just how bad the vibes were.

“Gathering Gloom for Workers,” goes the headline, reporting that “A spreading slump swells the long gray line of the unemployed.” The article said joblessness was so high in Detroit that community leaders “fear that they are sitting on a smoldering powder keg of urban unrest.”

If nothing else, this chronology is a reminder that conditions can change surprisingly quickly. By the time Reagan was reelected in 1984, the jobless rate was 7.2 per cent and falling, and inflation was down to 4.2 per cent.

Some commentators have argued that Biden has the opportunity to be an inverse of Reagan politically (much of this commentary, it should be noted, came before Senator Joe Manchin pulled his support from the president’s signature Build Back Better bill ). And there is of course no telling what the next three years will bring politically, regardless of what happens to the economy.

But in terms of the economic backdrop, it is important to understand the “why” of the Reagan economic reversal.

Those gloomy unemployment numbers in Reagan’s first two years were a consequence of aggressive tightening of monetary policy by Fed Chair Paul Volcker, who was aiming to end the high inflation of the 1970s.

Over the course of the previous decade, high inflation had come to seem inevitable. This led labour unions and individual workers to demand higher pay raises and made businesses willing to pay more and charge more for their products. This had settled into a vicious cycle, with deep social and political ramifications.

“Inflation wasn’t just an economic problem,” said Mike Konczal, director of macroeconomic analysis at the Roosevelt Institute. “It gave people the impression of a social and political breakdown, that the system was not working.”

Volcker wanted to break that psychology. He did it with steep interest rate increases that, in the service of inflation control, brought the worst downturn in five decades.

Across the government, including in the Reagan administration, there was a concerted focus on breaking inflation, even as the job market worsened.

“What I find startling about this downturn is that so few politicians are calling for federal job training or the extension of unemployment benefits,” said Alan Greenspan, a former presidential adviser who would go on to succeed Volcker, in the 1981 Time article. “Five years ago, politicians would have been stumbling all over themselves to demand anti-recession spending.”

The experience of the 1980s shows that things can get better, and that the economic and political fortunes can change faster than it might seem in a gloomy December.

By late 1981, there were signs it was starting to work. That same article, for example, notes that Teamsters who had managed a 31.5 per cent pay raise in 1979 promised to be “reasonable” in the next negotiations, and that employees at major airlines had agreed to a 10% wage reduction.

With this progress against inflation, Volcker was ready to relent and begin lowering interest rates. This enabled a speedy recovery from the recession, powering the Reagan boom and a period in which both unemployment and inflation were steadily falling.

As the Fed chair now, Jerome Powell has until recently faced the opposite problem.

For most of the 2010s, inflation was lower than the Fed aims for and the job market was persistently weak. And for the first nine months or so of the pandemic, too-low inflation and too few jobs appeared to be the predominant economic problem. Just one year ago, in December 2020, bond market prices implied that inflation would remain below the Fed’s 2 per cent target for years to come, and the jobless rate was still 6.7 per cent.

Powell and the Fed organised their strategy for monetary policy around building the Fed’s credibility that it would no longer allow a persistently too-low inflation and a too-weak job market. A new “flexible average inflation targeting” strategy introduced in 2020 was built on allowing inflation to sometimes overshoot 2 per cent.

That, in turn, helps explain why the Fed has been slow to move toward tighter money this year, even as inflation soared and the job market recovered quickly. 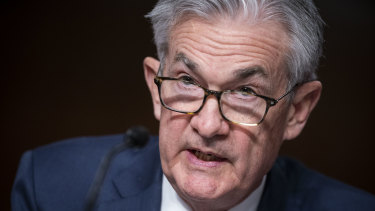 Federal Reserve chairman Jerome Powell this month signalled the US central bank will double the pace of its taper and raise rates several times next year.Credit:Bloomberg

Only this month, after year-over-year inflation reached a whopping 6.8 per cent, did Powell undertake a clear shift toward tighter money. He signalled the Fed would speed up the end of its bond-buying program and could begin raising interest rates in the first part of 2022.

Just as Volcker was willing to allow a recession to take hold to break the high-inflation cycle of the 1970s, Powell has, until recently, emphasised that an inflationary surge that started earlier this year was likely to be temporary and that the urgency of achieving full employment was paramount.

The Powell pivot to tighter money in 2021 is the equivalent of Volcker’s 1981 move: By then Volcker was ready to relent and, in effect, declare victory, cutting interest rates and setting the stage for the economy to recover. The signs that inflationary pressures were shifting downward was sufficiently compelling that the psychology had broken.

“It was a nasty, nasty fall, but Volcker stuck the landing to the point that many parts of the macroeconomic landscape could be changed and tilted toward prosperity and markets,” said Paul McCulley, an economist and senior fellow at Cornell Law School.

What would a full reverse Reagan economy look like over the next few years?

Over the course of 2022, inflation starts to fade. Consumers shift some of their spending back toward services and away from physical goods, corporate supply chain managers figure out how to adjust to whatever changes in demand prove permanent, and demand moderates as the Fed moves toward somewhat higher interest rates and Congress does not repeat its pandemic spending binge of the first half of 2021.

But, crucially, in the best-case scenario for Biden and the Democrats, the Fed doesn’t overdo it. Just as the Volcker Fed was able to achieve a simultaneous drop in unemployment and inflation in 1983 and 1984, the Powell Fed faces the delicate task of trying to bring down inflation while not acting so aggressively as to undermine further improvement in the job market.

The goal is to achieve something of a Goldilocks scenario for the economy by late 2022. In projections released this month, for example, the median Fed leader expected an unemployment rate of a mere 3.5 per cent and 2.6 per cent inflation in the final months of next year, with a strong labour market and gradually receding inflation continuing through 2024.

“If the Fed, through skill and fate and luck, gets this thing settled down in the next year or two, you can make a pretty strong case that the underlying progressive agenda, which is to deal with income and wealth inequality, could actually flourish,” said McCulley.

If that were to happen, it would be an economy in which the favourable aspects of the 2021 economy — workers empowered, wages rising, and so on — persist, while the high inflation that has overwhelmed those gains in the minds of many Americans fades.

It would be no easy task to achieve. History is littered with examples of the Fed raising interest rates to rein in inflation, only to cause a recession; indeed, it was a more common pattern than not in the decades immediately following World War II. In a pessimistic scenario, the inflationary forces that have taken hold will prove sufficiently profound that they won’t go away absent a recession.

But the experience of the 1980s shows that things can get better, and that the economic and political fortunes can change faster than it might seem in a gloomy December.