Delta Air Lines (DAL) Could Be Headed to $10 per Share

Delta Air Lines, Inc. (DAL), the airline giant, has flown its shares right into a classic wedge pattern. A wedge pattern has a falling resistance level and rising support line, leading the stock to a breakout point. The trick is figuring out which direction shares will ultimately be headed.

In the bigger picture, airlines are one of the weakest sectors of the market. Delta stock is still trading 45% below its pre-March peak. And you can't blame investors for not knowing what to do with this stock.

Even though airline traffic is picking up, the sector is still suffering. And without more money for the airlines, they are expecting to lay off thousands of employees by the end of the year. The longer it takes the United States to return to normal, the more uncertainty will build around airlines.

With Delta trading in a wedge pattern right now, we should see a breakout in the coming weeks. Take a look at the pattern in this price chart: 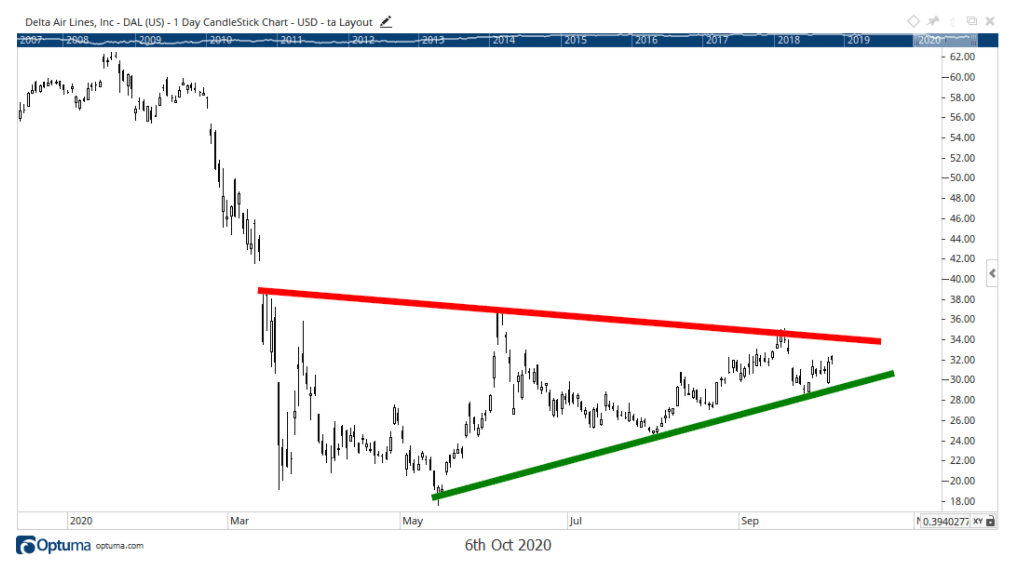 The resistance level is in red, and key support is in green. At some point in the next few weeks, one of these key levels will likely break, signaling where shares of Delta will head next.

Wedge formations are great for pricing the breakouts because we can get the expected move by taking the height of the pattern. In this case, it's $20 per share. If we get a breakout to the upside, the stock is set to roar to the $50s – more than a 50% rally. However, if shares continue to show weakness and head lower, then we are talking about the stock hitting $10 per share in the next few months – a whopping 66% plunge.

We can't ignore the fact Delta shares are still 45% below their pre-March peak while the broad stock market indexes have climbed back to new highs. This weakness could signal that Delta is about to hit $10 per share for the first time since 2012.

Shares of Delta are trading in a wedge pattern that is on the cusp of a major breakout. We just don't know which direction it's about to head. The upside price target is $54 per share, while the downside target is just $10 per share.