President Biden has endorsed a minimum tax on income that well-off corporations report to investors in order to help fund his sweeping Build Back Better plan.

The proposed minimum tax on book income would impose a 15% minimum on corporations based on profits they publicly report on their financial statements to shareholders. The levy would only apply to companies that reported more than $1 billion in income for three straight years.

It would preserve "the value of business credits – including R&D, clean energy, and housing tax credits – and include some flexibilities for companies to carry forward losses, utilize foreign tax credits, and claim a minimum tax credit against regular tax in future years," according to the three Democrats – Sens. Elizabeth Warren of Massachusetts, Angus King of Maine and Ron Wyden of Oregon – who proposed the tax.

The Congressional Budget Office determined last week that the tax would generate about $319 billion over the next decade, which would go toward paying for Biden's social spending and climate change plan.

But a new analysis by the nonpartisan Tax Foundation shows how the measure could inadvertently hurt private pensions.

By relying on measures of income reported on company financial statements, the proposed minimum tax could "fall harder on companies that use mark-to-market accounting for their pension plans," Tax Foundation economist Erika York wrote in a recent blog post.

Pensions, which offer guaranteed retirement benefits for employees, are less common today due to the rise of defined-contribution plans such as 401(k)s. But many companies still have legacy plans that offer large sums to employees and retirees; in many cases, the pensions plans are dramatically underfunded. 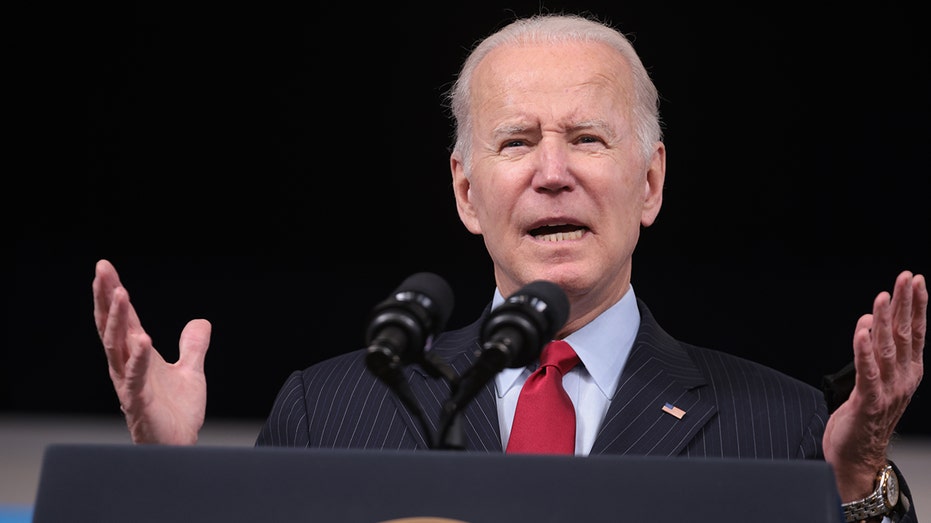 President Biden speaks on the economy in the Eisenhower Executive Office Building in Washington, D.C., on Tuesday, Nov. 23, 2021.  (Oliver Contreras/Bloomberg via Getty Images)

Over the past decade, more than a dozen firms have opted to use "mark-to-market" accounting for pensions and other defined-benefit plans, a method that recognizes actuarial gains or losses in the year they occur, rather than examining changes over time. In short, it's a way to measure a company or individual's assets based on current market conditions, offering a more accurate representation of assets and liabilities. The mark-to-market system can introduce a lot of year-to-year volatility in financial statement income that tops $1 billion for some companies, largely due to fluctuations in the value of pension plan investments and interest rates.

The issue is that Democrats' 15% minimum tax on book income of large corporations would take into account mark-to-market pension accounting – even though firms cannot use pensions funds for their operations, York wrote. While it makes sense that changes in pension obligations are included when companies provide investors and markets with a direct look into their financial health, "it does not make sense to bring changes in pension assets (or pension costs) into the tax base," she wrote.

"Doing so could create ‘phantom income,’ where a company’s income within the book minimum tax could rise when its pension plan grows (or fall when it shrinks)," York said. "Those effects could be exacerbated for companies that use mark-to-market accounting as it can lead to particularly volatile changes in a corporation’s reported earnings."