The 3 habits that hurt retirement planning

Ramsey Solutions financial expert Chris Hogan on how Americans can set a budget, tackle their debt and boost their retirement savings.

About 10,000 Baby Boomers reach retirement age each day, and some are choosing to leave their homes behind in search of a more desirable place to live out their senior years.

But where are they headed?

U.S. News & World Report unveiled its annual best places to retire rankings on Tuesday — with Florida scoring four of the top 10 spots, including three of the top five.

That may come as no surprise considering the favorable tax laws in the state including no statewide income tax.

"Deciding where to retire is an important part of your life plan," Emily Brandon, senior editor for Retirement at U.S. News, said in a statement. "When considering potential retirement spots, you should look for an affordable cost of living, proximity to health care services and a strong economy, especially if you plan to work part-time.

The rankings are based on an analysis of the 125 largest metropolitan areas in the United States, based on a weighted average of scores on six items, including housing affordability, happiness, desirability, retiree taxes, job market and health care quality.

Here’s a look at the results:

Ft. Myers jumped from its second-place ranking last year to the top spot for 2020.

The city has a population of about 700,160 people and an average high temperature of more than 84 degrees.

The median home price is $219,200, while the unemployment rate is below the national average, at 3.4 percent.

More than 25 percent of the population is over the age of 65.

Slightly larger than Ft. Myers, Sarasota has population of about 768,380 people.

The report notes that a migration of wealthy residents has pushed housing prices higher – 30.6 percent of the population is over the age of 65.

Lancaster fell from its top-ranking last year primarily due to decreases in both its happiness and housing affordability scores.

There is also a large proportion of younger residents in the town. More than 26 percent of residents are under the age of 20. 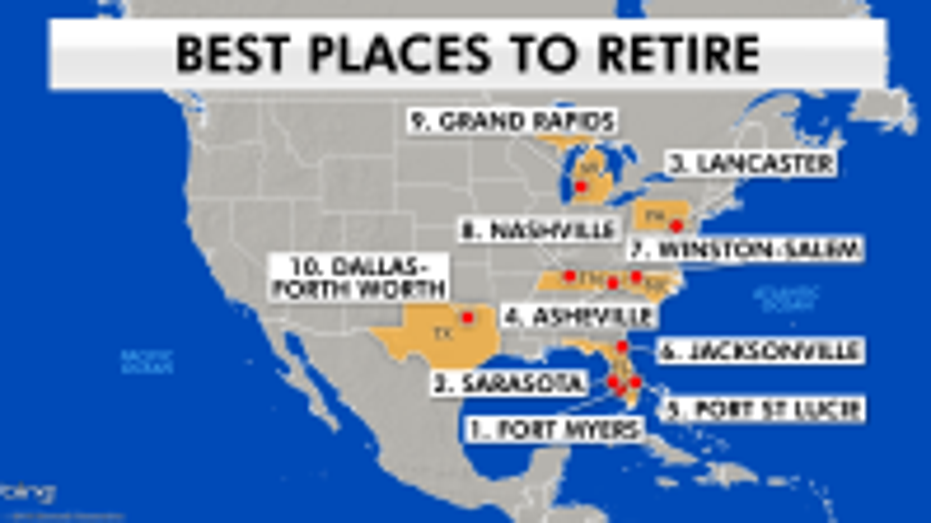 Asheville, North Carolina, another metro in the South, ranked fourth on the list.

The city has 22 public schools and 43 private schools.

Florida’s Port St. Lucie followed Asheville, taking this year’s fifth spot. It is located roughly halfway between Miami and Orlando, with a population of 454,482.

Local housing prices are likely to rise in the near future, however, as the city prepares for a building boom.