Banks should shine among S&P 500 stocks this earnings season

Surprise: Analysts expect banks to be one of the brighter areas of the stock market during an overall dismal earnings season.

As second-quarter earnings season begins, recent economic news has been good and the Dow Jones Industrial Average DJIA, -0.29% and S&P 500 index SPX, -0.04% are near recent records. But what had been steady and significant earnings growth has slowed or even reversed. Large U.S. banks, buttressed by strong credit quality, plenty of excess capital and a more friendly regulatory environment, are expected to buck this trend when they begin reporting July 16.

Here are expected changes in earnings per share for the 11 sectors of the S&P 500, based on weighted aggregate consensus earnings estimates among analysts polled by S&P Global Market Intelligence:

There are many moving parts to the earnings outlooks. Years of stock buybacks have boosted EPS (by reducing share counts), but some companies now may wish to curtail buybacks given high share prices. Trade tensions with China have had an obvious effect on the technology sector. A strengthening dollar pressures commodity prices.

U.S. monetary policy is unsettled. Investors’ expectations of interest-rate cuts, brought about by the change in Federal Reserve policy in March and the dovish language of the Federal Open Market Committee statement in June, may be offset by the better-than-expected employment report. More than a decade of low interest rates, and now even negative yields for trillions of dollars of government paper in Europe and Japan, have had a very positive effect on U.S. stock prices.

The March Fed policy reversal and expectations of cuts in the short-term federal-funds rate have already led to a significant decline in long-term rates, which has meant a jump in mortgage loan refinancing activity, which means more fee income for the banks. Then again, the lower rates lead to less favorable repricing for commercial loans and home equity lines of credit, which means pressure on the banks’ interest income.

So Oppenheimer analyst Chris Kotowski expects large U.S. banks’ net interest margins to compress through 2020. At the same time, he and Wells Fargo senior global equity strategist Scott Wren expect a continued good run for financial stocks because of their relatively low valuation and their combination of increasing dividends and share buybacks.

Bank stocks typically trade at significantly lower valuations to earnings estimates than that of the S&P 500. But unusually, the discount over the past five years has increased: 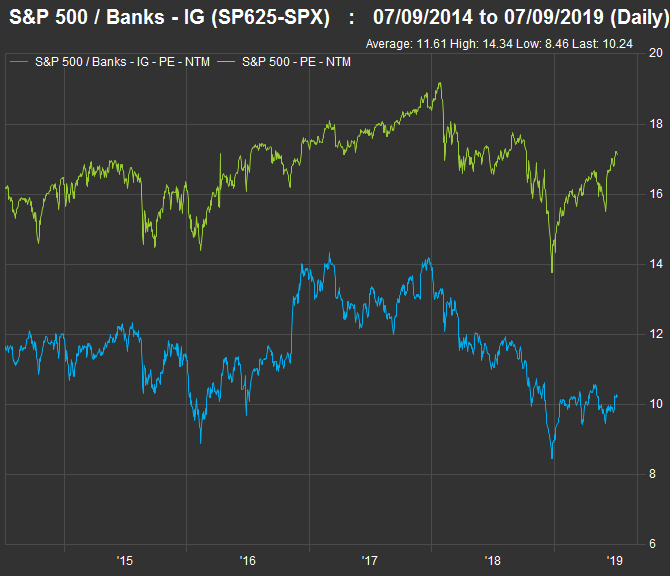 Five years ago, the S&P 500 banks as a group traded at a weighted forward price-to-earnings ratio that was 72% of the valuation for the full index — a typical level. Now the group trades at a forward P/E valuation 60% of the full index. So the discount has gotten significantly greater even as financial companies’ EPS growth is expected to lead all sectors.

Warren Koontz, head of value equity at Jennison Associates, believes large U.S. banks are in “the best shape they have been in for 30 years in terms of balance sheets, the management of the companies and the capital they have to deploy.”

Jennison Associates manages $176 billion for private clients and mutual funds. It is a subsidiary of PGIM, the investment management business of Prudential Financial PRU, -0.23%

During an interview on July 9, Koontz emphasized the banks’ tremendous investment in new technology, which “allows them to increase their footprint without expanding their branch networks significantly.”

Getting back to the valuations relative to earnings estimates, Koontz pointed to how maligned bank stocks have been by investors. Given dividend payouts likely to increase “at double-digit rates” and significant share buybacks, “a company in another industry with those characteristics would be selling at far higher multiples than the banks are now.”

Here are expected EPS results for the largest 10 U.S. banks by total assets, among analysts polled by FactSet, compared with actual results from the second quarter of 2018:

For Capital One, the year-earlier EPS figure was boosted by a net gain of $400 million on the sale of most of its consumer home loan portfolio. The company’s adjusted EPS for the second quarter of 2018 was $3.22.

Analysts are most positive on Citigroup; 86% give it a “buy” recommendation, according to FactSet data. Bank of New York Mellon has the largest share of “sell” recommendations, at 23%.

JPMorgan and Wells Fargo are the first to report earnings, on July 16.

Here’s how the group’s consensus EPS estimates have been revised since the end of the first quarter:

And here’s how the banks’ full-year EPS estimates for 2019 have changed since the end of the first quarter: