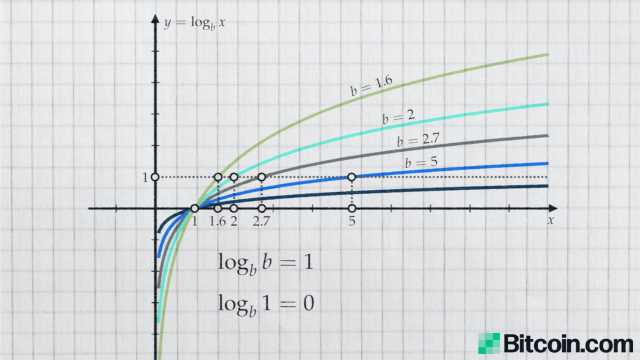 In order to give our readers some deeper perspective, Bitcoin.com News has been covering a few useful price models that technical analysts and crypto traders leverage to forecast bitcoin’s future prices.

The previous report discussed the Golden Ratio Multiplier and how bitcoiners can use the well known golden ratio and the Fibonacci sequence to predict future values. The next subject takes a look at how crypto enthusiasts can use Logarithmic Growth Curves to get some perspective on bitcoin (BTC) price cycles.

Bitcoin’s price timeline can be seen from a logarithmic perspective. In fact, a log price chart is one of the most popular in the world of crypto and traditional finance technical analysis. In simple terms, a crypto asset’s log chart leverages conventional percentage rates and all spacing is equivalent to scale.

Even the most basic of logarithmic BTC charts, the individual can get an entirely different look than the typical crypto price charts using candlesticks and different time frames. Additionally, bitcoin traders can look at the crypto asset’s Logarithmic Growth Curves model which gives even more perspective. This particular Logarithmic Growth Curve (LGC) price model hosted on lookintobitcoin.com was created by Cole Garner and @quantadelic. Further, the price model was also “inspired by the work of Harold Christopher Burger,” the website notes.

Harold Christopher Burger published a comprehensive study on LGC in his paper called “Bitcoin’s natural long-term power-law corridor of growth.” When Burger wrote the paper in 2019, he mentioned a number of individuals like John McAfee ($1M), and Nouriel Roubini ($0) forecasting outlandish price predictions.

Burger said at the time, he is “quite confident in the long-term, the price will indeed evolve approximately as stated” in his article. His study notes that bitcoin follows a price corridor that can be divided into two bands.

“One which lies at the lower-end of the price predictions and is rather thin, the other one being much larger and lying at the higher-end predictions,” the analyst’s paper details. “Bitcoin’s price spends about equal amounts of time in both bands. This implies that large bubbles and busts are likely to continue to exist.”

The researcher that blogs for Quantodian Publications explains that the price model helps people determine the market’s entry and exit points. “This model allows us to make broad predictions concerning the long-term future price of bitcoin,” the blog post emphasizes referring to two forecasts.

After doing some math, equations, and linear regression, Burger found that a basic level of support for BTC’s price followed a power-law. He performed the linear regression with bitcoin’s price peaks in 2011, 2013, and 2017.

“The market tops also seem to follow a power-law,” Burger said. “If the next market top also follows this power-law, the market top will lie on this line. The slope of this power-law is 5.02927337, whereas the fit on all data gave us a somewhat larger slope of 5.84509376. This indicates a relative taming of bitcoin bull markets compared to the overall trend-line,” the author added. When Burger quantified these measurements defined by the three bitcoin market price highs and coefficient of determination, the researcher came up with two power-laws. He also leveraged random sample consensus, or RANSAC to get more data points.

The researcher then found two modes, one normal and one bull, and was further able to formulate different power-law models for BTC’s price. Burger shows a chart that includes “power-law fit,” “power-law fit minus bias,” “power-law fit on only three tops,” and “robust fit.”

“We now have various models to predict the future price of bitcoin. All we have to do is extend the graph,” Burger blog post notes. The researcher adds:

‘Black Thursday’ and the Current State of Affairs

The power-law corridor of growth blog post written by Burger has followed bitcoin’s price movements pretty well since it was published. The Quantodian Publications author does note, however, when he was modeling a support line for bitcoin’s price to follow a power-law that there was one instance in 2010, where the price of BTC breached below the line.

Since the blog post was published on September 4, 2019, there is a second instance where bitcoin’s price breached the “robust fit” line.

This specific time was during the financial meltdown on March 12, 2020, otherwise known as ‘Black Thursday,’ when BTC and nearly every asset in the world saw values sink. March 12 was considered a freak instance and possibly an outlier because of the fear and shock Covid-19 brought to financial markets.

Lastly, the current chart shows bitcoin went through a bullish cycle in recent times, but hasn’t peaked like the rest of the bull cycles. In fact, the chart shows the northbound price climax plateaued much lower than the other peaks and the price has started to head southbound.