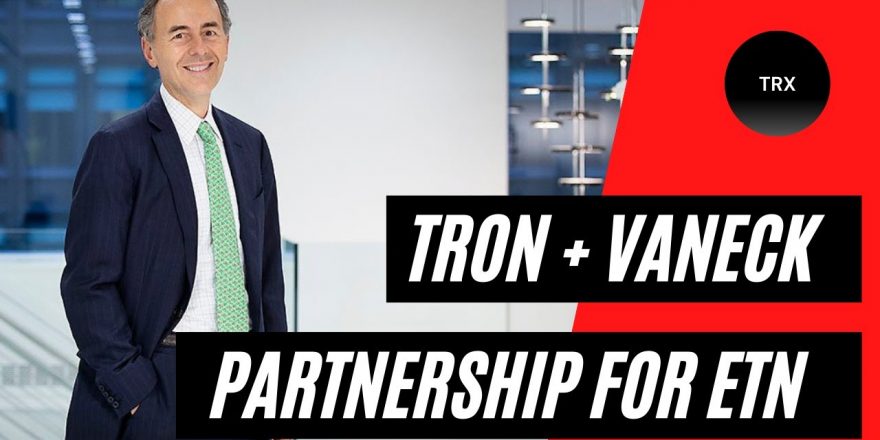 In the last year alone millions of dollars have flooded into the blockchain realm from institutions, in a sign of just how in-demand crypto exposure is for retail and institutional investors.

All of the leading banks have set up crypto desks, and as of August 2021, $70 billion worth of Bitcoin has been held institutionally, with the number picking up speed fast and furiously.

The latest show of support from an institution comes from VanEck, an investment management firm that gives clients access to mutual funds and ETFs.

VanEck now has a fund for Bitcoin, valued at $263 million, an Ethereum fund worth $122 million, and not far behind is its TRON ETN.

So Who Is TRON?

TRON has been described by some as an ‘Ethereum Killer’. It is certainly doing its best to live up to that title, as one of the first blockchain ecosystems to use the Proof of Stake consensus model.

It is greener, faster and cheaper than both Ethereum and Bitcoin, although Ethereum is desperately trying to play catch-up by upgrading to the new Proof of Stake model, from their existing sluggish, energy-guzzling and expensive proof of Work model, with gas and transaction fees costing in the hundreds of dollars.

TRON is forging forwards with many apps, platforms, and protocols choosing to build and base themselves on this streamlined chain.

The founder of TRON, the colorful Justin Sun has recently announced an ecosystem fund worth $1,111,111,111 which will go to entice and support developers of both new and existing products that want to build or transition to TRON, as well as going to the development of the overall ecosystem, which includes its stable of NFT platforms, Defi apps and Stablecoins.

TRON is a massive supporter of stablecoins, currently listing a variety of leading contenders, including USD Tether, USD Coin, TrueUSD, and TRON’s own USDJ, which enjoys a daily transfer value of up to $10 billion.

In addition to this TRON just recently launched its BitTorrent Chain, also known as BTTC, which is a BTTC POS protocol for the transfer of value across a selection of leading chains like TRON, Ethereum, and Binance Smart Chain (BSC).