The United States Securities and Exchange Commission is cracking down on yet another company that made a crossover from another industry into blockchain and cryptocurrency. This time, it’s e-commerce giant Overstock.com, as well as two former executives: Gregory Iverson, who resigned from his position as CFO on September 17th, and Patrick Byrne, who resigned from his position as CEO on August 22nd.

The lawsuit specifically takes issue with the launch of two products: tZERO, Overstock’s token trading platform, and a digital security token that was to be used to pay dividends to investors. The lawsuit says that Overstock told investors that the launch of tZERO would bring massive benefits–and before exiting his position as CEO, Byrne arranged for Overstock’s next investor dividend to be paid out in the digital security.

The SEC claims that this was a strategy to exact “revenge upon short sellers”–and indeed, the New York Post explained that the security was “accessible only through a brokerage called Dinosaur Financial, the dividend wasn’t payable until Nov. 15 and wasn’t tradeable until six months after that.”

Therefore, the SEC believes that the digital security was an attempt “create a short squeeze by offering a digital token dividend that would not be registered and could not be resold for at least 6 months,” and that “the lock-up period created by the issuance of an unregistered security effectively resulted in the inability of short sellers to deliver the security upon the surrender of their shares.”

Byrne’s alleged plan to create the squeeze and thus artificially inflate the price of Overstock’s stock value seems to have worked. The lawsuit notes that “shares of the company spiked up from $16 to almost $27.00 per share” before deflating to $15.50 following Overstock’s announcement that the trading restrictions on the digital security would be relaxed. 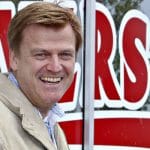 The lawsuit says that Byrne still managed to profit from the squeeze when he made the decision to liquidate his share in the company while stock prices were high: “Market participants and the SEC… thwarted Overstock’s plan but not before defendant Byrne liquidated over $102 million of his privately held Overstock shares, including over $91.98 million of stock that he sold between September 16 and 18, 2019.”

Overstock also allegedly failed to disclose information that would have lowered its stock valuations in order to “sell additional shares of Overstock in the market to create a cash fund necessary to support its crypto projects (in the face of them being abandoned by investment partners.”

Additionally, the lawsuit points to a number of bizarre blog posts that Byrne made alleging that the “deep state” and the SEC were in cahoots to ruin him and ruin the company.

The language in the SEC’s lawsuit bears striking similarities to another lawsuit that the Commission filed against Kik, a messaging platform that held an ICO in 2017.

In this most recent lawsuit, the paints a picture of Overstock as a money-hungry company that “embarked on a blockchain strategy…designed to profit on new markets for cryptocurrency.”

“The Company had been on a long streak of losing money, and had not reported a net quarterly profit since 4Q:16,” the filing reads. Additionally, “it was recently reported that, for the last several years, defendant Byrne spent no fewer than 220 days a year on the road, “spreading his blockchain gospel, despite the fact that Overstock was hemorrhaging cash.”

The language used in the lawsuit against Kik also seems to take direct issue with the alleged motivations behind company’s choice to turn to crypto: “In late 2016 and early 2017, Kik faced a crisis Fewer and fewer people were using Kik Messenger,” the lawsuit reads.

“The company expected to run out of cash to fund its operations by the end of 2017, but its revenues were insignificant, and executives had no realistic plan to increase revenues through its existing operations. In late 2016 and early 2017, Kik hired an investment bank to try to sell itself to a larger technology company, but no one was interested.”

In its counter-filing, Kik called out the SEC: “the Commission’s Complaint reflects a consistent effort to twist the facts by removing quotes from their context and misrepresenting the documents and testimony that the Commission gathered in its investigation.” Kik also launched a fund called Defend Crypto to help crypto companies fighting the SEC in court–a fund that Overstock may soon be calling on for assistance.

Price of Bitcoin Drops After $150 Million Liquidated on BitMEX

Nova Scotia Warns Canadians of Getting Scammed by LeadingPips