The infamous Terra(LUNA) & TerraUSD(UST) crash earlier this month has shaken the entire crypto space. The crash was so brutal that the assets are unable to recover even after a fortnight. However, Do-Kwon, the founder has now come up with a revival plan which mainly suggests the creation of a new chain called Terra(LUNA), while the older one is to be rebranded to Terra Classic(LUNC).

Now when LUNC and LUNA both will be on the battleground, which one will surge with flying colours?

Before digging deep into history, let’s have a glance at the series of events that led to the creation of LUNA 2.0!

Terra’s (LUNA) price was rising high despite the sideways trend of the major crypto assets in the market and secured its position within the top 10. All began to tremble down when an anonymous trader dumped nearly $286 million UST on Curve and Binance, probably to check the stability of this algorithmic stablecoin-UST. And as the UST was backed by Bitcoin, the Luna Foundation Gaurd(LFG) emptied their BTC wallet that had more than 80,000 BTC. 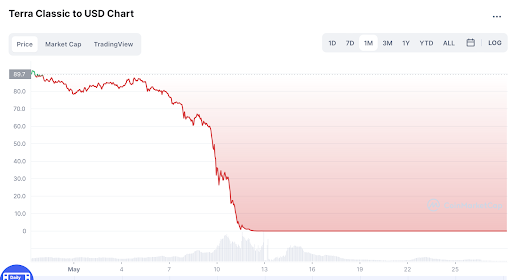 Therefore, as expected the BTC prices collapsed dragging the entire crypto space including UST down. And as the peg was highly correlated to LUNA price, LUNA also fell drastically to almost a non-recoverable position. Further, the FUD hovering within the crypto space impacted USDT as well, but it recovered quickly. However, the algorithmic stablecoin which was criticized by many literally failed the stress test.

The AfterMath of the Crash

The after-effects of the crash are still being withnessed within the crypto space, where-in almost all the assets including Bitcoin are swinging within a narrow range. On the other hand, the LUNA price still remains heavily dumped at the press time, while the UST is constantly recording huge losses every new day. And hence this extreme volatility kept many traders away from the asset, while most the exchanges suspended LUNA & UST trading temporarily.

On the other hand, many people lost their whole life savings due to this crash, which compelled some to take drastic steps. Also, the founder and the executives of UST were sued with a lawsuit by investors. Therefore, after being surrounded, Terraform Labs was dissolved immediately while the legal team resigned. Amid all the turbulence, Do-Kwon proposed a revival plan.

The algorithm, states that whenever UST losses its peg, new LUNA tokens will be minted and some of UST will be burnt to stabalize the peg at $1. On the other hand, if UST’s peg exceeds $1, LUNA would be burnt, adding up new UST to the circulation. Due to this mechanism, LUNA price suffered drastically as the circulating supply raised by more than 10x.

Therefore, the community and some of the known personalities of the crypto space demanded to burn the extra minted LUNA tokens. While the founder, Do-Kwon after providing the dead wallet address, said it is ‘pointless’.

On the other hand, Do-Kwon came up with a revival plan which was recently passed with a majority. Moreover, as per the schedule, the new LUNA chain has been deployed while the first, genesis block has already been produced.

So what was in the revival plan and how the voting was carried out?

However, a major drawback of this revival plan is, that the founder completely marginalized the algorithmic stablecoin-UST. And hence another proposal was passed recently to burn nearly a billion UST tokens. Yet the revival plan was passed with more than 65% of the votes and went live a few moments ago.

The Proposal Voting & its Loophole

It is a known fact that if more than 6 trillion LUNC are in circulation, the holders may also be in billions. In fact, South Korean holders multiplied ever since the crash. On the other hand, Whale holdings also intensified as the asset available now are a very discounted prices. And hence may be indicating a significant price action may be incoming for LUNC price very soon.

On the other hand, many criticisms are hovering considering the LUNA 2.0 launch. Many advise to stay away from LUNA as the future of the token is extremely uncertain. What is making some of the traders uncertain about LUNA 2.0? Let’s see,

The Luna community is built to participate in the voting on the proposals related to the network developments. As in many other voting procedures, the more you hold LUNA, the more authority you own to vote. And hence it is been speculated that a couple of addresses filled with either LUNA or the Terra blockchain projects like Mirror Protocol were specifically used for voting purposes.

LUNA Air-Drop and its Loopholes

It has been announced that the older LUNA and UST holders will be receiving an air-drop of new LUNA tokens. Irrespective of whether the holders are pre or post the crisis, everyone is eligible for the air-drop. And hence it was completely unfair to the traders who bought LUNA tokens at a very higher price.

The main problem here is, from where will Do-Kwon bring liquidity to generate value for new LUNA tokens. Will he utilize the funds procured from staking LUNC tokens? As the LUNC holders are required to stake their tokens to get LUNA air-drop!

No Proposal For Bitcoin Liquidation

After the crisis, Terra bought multiple proposals, conducted voting and later finalized the next plan of action. But when the very important step of emptying their BTC wallets had to take, no such procedures were followed. No doubt, the founder Do-Kwon and Terra may hold some veto but voting was mandatory on Bitcoin reserves as even a beginner may understand that flooding 80,000 BTC into the market may crash the prices drastically.

LUNA Price vs LUNC price: A Battle of Supremacy

It is pretty clear now that LUNA 2.0 is completely under the founder, Do-Kwon, who miserably handled the crash conditions. No doubt the excess minting could not have been stopped, but as USDT burnt 3 billion tokens to stabalize its peg, Do-Kwon could have also taken the same step. But he insisted to go for a new chain without filling the gaps of the older chain.

On the other hand, LUNA is expected to be more community-driven and huge Whales have been added up recently, to compete with the insider whale-Luna Foundation Guard! Therefore, after surviving the crash and its aftermath, traders may not fully believe in Do-Kwon again. And this may impact the LUNA price in future.

Adding to the substance, the burning of LUNC and UST has already been proposed and also passed. Therefore, with the ignition of burning, the probability of price stability appears to be at its maximum. As when Do-Kwon provided the Dead Wallet address, more than $280 million worth of LUNC were burnt in a single day, which had raised the LUNC price by more than 70%. And if billions of tokens are burnt, the dream of LUNC price stabilizing above $1 may come true.

Overall, some analysts still believe, it was a planned attack, executed very well which is now, maybe, being encashed very well. However, the future of LUNA may be a little uncertain for some days, while LUNC may gain more trust in the upcoming days.

Yet as many analysts are advising the traders to be very cautious with LUNA 2.0 as they believe LUNA would dump massively after its launch.