Home » Crypto » Stable Coins to Carry Forward the Legacy of Cardano? Will This Impact ADA Price? 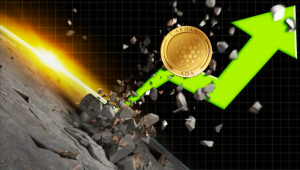 Stable Coins to Carry Forward the Legacy of Cardano? Will This Impact ADA Price?

Stable coins have been gaining steady popularity in the crypto space. As traders are preferring these over FIAT to hold their extracted gains from the digital assets. Cardano has been at an appreciable pace in the adoption of the growing industry. Likewise, stable coins from the house of the 5th largest crypto are increasing at a steady pace. Consecutively, Ardana raises $10 million in funding.

AgeUSD is the first stable coin on Cardano, which was launched by EMURGO. The stable coin is a new algorithmic stable coin protocol, that is developed on the Ergo blockchain. In alliance with IOG, EMURGO, and Ergo foundation.

The protocol does not rely on Collateralized Debt Positions, as these are vulnerable to volatility and blockchain overloading. The platform aims at automation to a greater extent, with an attempt to create a higher-security alternative to prevailing trends in the space.

Djed is a stable coin focussing on decentralized finance for the Cardano network, developed by IOG. The issuing authority of which is with Coti. Which is Cardano’s payment gateway. The stable coin will be built on an algorithmic design using smart contracts. To ensure price stability, while providing a tool for De-Fi transactions.

The design of the stable coin is such that, it can be used for paying transaction fees on the Cardano network. As it avoids the volatile and sky-high gas fees. The protocol will operate by maintaining a reserve of base coins while minting and burning other assets.

Also Read : 5 Altcoins to Bet on This Bull Run ! Look Out For Entry and Exit Points!

Ardana is a decentralized stable coin ecosystem, which aims at bringing the necessary DeFi primitives. That is required to bootstrap and maintain any economy to Cardano. The protocol features full decentralization, which is unbiased, backing collateral, and pegged to the USD. It allows users to borrow stable coins against locked collateral. And a secure store of value, preserving value even in volatile markets.

Ardana claims to be the leading stable coin and stable swap DEX on Cardano. The platform plans to hold a public sale of another token DANA. The proposal for the sale is with 35.625 million out of 125 million tokens up for asking for $0.30 to $0.60 each. Ardana received funding worth $10 million in seed capital from Three Arrows Capital and Ascensive Assets.

Collectively stable coins from Cardano’s network are turning into an ideal choice for buyers, over those built on Ethereum. Owing to lower transaction charges on Cardano. The stable coin space holds good potential for traders in the crypto community. We can expect, more such assets coming out from the house of Cardano.