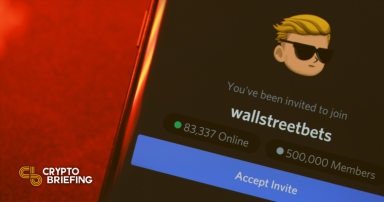 Moderators at Reddit’s /r/WallStreetBets community on Reddit have decided to create a spinoff subreddit focusing on cryptocurrency.

Crypto Forum Has Been Created

The new subreddit is called /r/WallStreetBetsCrypto and will be operated by the same moderators in the same format, according to an announcement published on Wednesday.

Though WallStreetBets allows members to discuss most types of investment, cryptocurrency discussions are largely prohibited on the main subreddit. Moderator bawse1 explained that crypto-focused discussion has been considered since April, but was not implemented due to concerns about crypto topics taking over the forum entirely.

“We always kept crypto out of /r/wallstreetbets because it just isn’t what this community is about,” he noted.

Later, he found a way “to allow at least some discussion” by allowing only Bitcoin, Ethereum, and Dogecoin conversations. That policy was implemented in April and intermittently reversed, leaving members with no reliable way to discuss cryptocurrency.

January’s Dogecoin surge was tangentially tied to /r/WallStreetBets as well. Though discussion of DOGE did not take place on the subreddit, one user on Twitter associated with the group was single-handedly responsible for mass investment in the coin.

The new crypto-focused subreddit is unlikely to have as much of an impact as its parent group any time soon. While /r/WallStreetBets has 10.8 million readers, /r/WallStreetBetsCrypto has just 13,800.

Disclaimer: At the time of writing this author held less than $75 of Bitcoin, Ethereum, and altcoins.