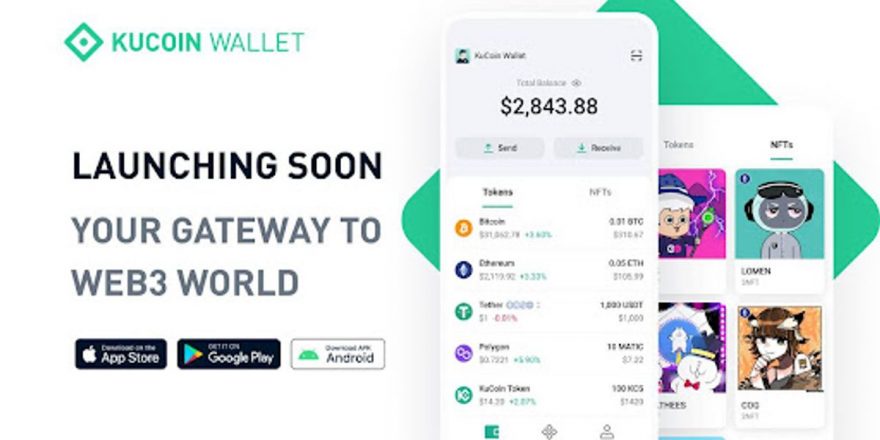 The global KuCoin exchange has entered the Web 3.0 market with the announcement of KuCoin Wallet – a fully decentralized self-custodian wallet application. KuCoin Wallet is set to go live later in June. The KuCoin Wallet official website will be launched on June 1.

The parent exchange has already announced that open beta testing of KuCoin Wallet is scheduled to start in the coming days, fast-tracking the KuCoin ecosystem into the Web 3.0 environment. The announcement also reveals that KuCoin Wallet is set to be a convenient and intuitive wallet application with multi-chain aggregation support and the functionality giving users the ability to buy, store and exchange various cryptocurrencies, as well as NFTs.

KuCoin Wallet is expected to provide a one-stop solution for Web 3.0 accessibility, giving users the chance to leverage the KuCoin ecosystem and send, receive, and store such assets as BTC, ETH, USDT, USDC, and BNB. Among the additional functions of the wallet will be support for various DeFi, GameFi and NFT services. The latter will be powered by KuCoin’s latest Windvane NFT marketplace, which enables users to buy, store, and view their NFT collections.

“As the gateway to the Web 3.0 network, crypto wallets are an important requirement for users to participate in the decentralized ecosystem and have developed far more than being a mere tool to store digital assets. The launch of the official website of KuCoin Wallet is additional proof that shows the determination of KuCoin to enter the Web 3.0 field at a critical time, with our goals going beyond centralized trading services and entry into the decentralized world to extend its business further,” as stated by Johnny Lyu, the CEO of the KuCoin exchange.

Security is a major component of the new application, which has been thoroughly audited by the market-leading Hacken security company. KuCoin states that users of KuCoin Wallet will enjoy a self-custodian experience, having complete control of their assets and private keys without any external interference.

“KuCoin always hopes to better cater to the needs of all classes of investors. The release of the official website of KuCoin Wallet is one step further for KuCoin to make an exploration in Web 3.0,” as Jeff, the Head of KuCoin Wallet division, commented on the announcement of the application.

KuCoin’s exploration into Web 3.0 is an ongoing endeavor that the exchange is bolstering through continued advancements, such as the establishment of the $100 million Creators Fund. The latter is intended to act as a venue for empowering Web 3.0 development efforts.