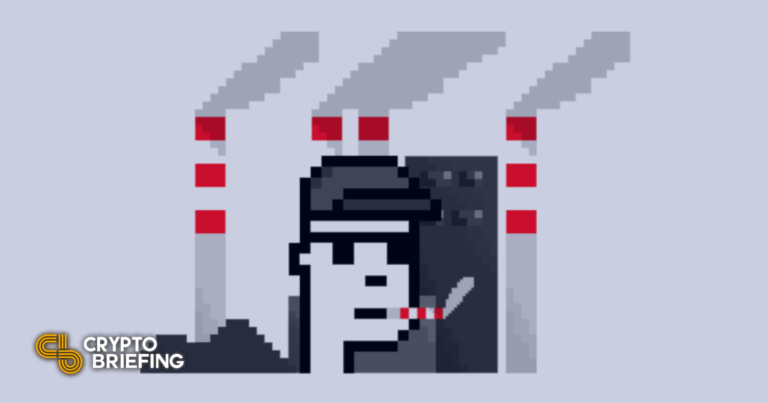 Has Banksy Just Released His First NFT on Ethereum?

A link to the NFT’s OpenSea listing was posted on Banksy’s official website today.

It looks like Banksy might have just minted his first NFT, or someone has pulled off a sophisticated hoax.

A subpage on Banksy’s official website briefly appeared under the URL “banksy.co.uk/NFT.html” earlier this morning. The page featured a piece of digital art that links to a listing on the popular NFT marketplace OpenSea but has since disappeared from his site. The NFT was put up for sale on OpenSea with an auction ending this Friday but has already been sold.

The piece, titled “Great Redistribution of the Climate Change Disaster,” features an adapted image of Punk #7804 standing in the foreground of what looks like a factory drawn in pixel art style. Punk #7804 is one of the most valuable pieces in the coveted CryptoPunks NFT collection. It sold for $7.57 million earlier this year.

The NFT was minted earlier today. The user’s Ethereum address can be viewed on Etherscan.

The NFT collector and influencer Pranksy brought attention to the listing by posting a link on Twitter early Tuesday. He and other NFT enthusiasts speculated over whether the listing was the real deal. Some pointed out that the NFT had been listed by a user going by the name “gaakmann” as part of the “gaakmann Collection.” Banksy has previously used the Bryan S Gaakmann, which is an anagram of “Banksy Anagram.” Since posting the link, Pranksy has entered a high bid of 100 wrapped ETH, or about $336,026.

Another factor that could suggest the item is a genuine Banksy is the theme of the piece. Banksy is known for supporting environmental causes, so the commentary on climate change would fit with his previous work. NFTs have been particularly divisive as the space has exploded this year; many have taken shots at the technology for its supposed impact on the environment (most NFTs are minted on Ethereum today, which is still using an energy-intensive Proof-of-Work mechanism ahead of its move to Proof-of-Stake).

Banksy is also one of art’s most elusive figures, known for his concealed identity and elaborate stunts. There’s an argument to be made that the secretive nature of the listing fits his typical style.

Nonetheless, without any official confirmation or announcement from Banksy or his authenticator Pest Control, it’s difficult to say whether the item is genuine or not just yet. It’s possible that someone hacked Banksy’s website to give the illusion that he had created the piece. Moreover, as the NFT space has boomed this summer, scammers may be more inclined to take advantage of the hype. After news of the listing surfaced, The Block researcher Larry Cermak took to Twitter to point out that the address that minted the NFT had received a transaction from another address holding almost $30,000 in BUSD. The address has also previously used the privacy-preserving tool Tornado Cash, which raises suspicions. Other NFTs imitating Banksy’s signature style have surfaced in recent months. One group also burned an original piece of his work and tokenized the piece on Ethereum, raising $380,000 in an auction.

However, if “Great Redistribution of the Climate Change Disaster” is an original Banksy, $336,026 could turn out to be a bargain for a one-of-a-kind NFT from one of the most popular street artists in history.

Editor’s note: This feature was amended to include a note about the Ethereum address that funded the NFT creator’s wallet.

Disclosure: At the time of writing, the author of this feature owned ETH, ETH2X-FLI, WETH, and several other cryptocurrencies.