Home » Crypto » Eyes on the Charts: Bitcoin Is Testing a Support Level Formed in Early September

Eyes on the Charts: Bitcoin Is Testing a Support Level Formed in Early September

Bitcoin has entered a period of consolidation after peaking at $15,975 late last week.

The cryptocurrency has bounced between those highs and lows around $14,500 due to volatility in the price of the U.S. dollar and other macro markets. Investors around the world are trying to grapple with a Biden presidency and the news that a vaccine for the pandemic is potentially right around the corner.

While Bitcoin remains close to the highs, the asset is nearing an important technical support level that was formed in September.

Bitcoin’s rally over the past few weeks has often been described as a parabola. When an asset rallies 50% in the span of a month, what else are you supposed to call it?

Although consolidation is to be expected, Bitcoin is on the verge of testing the support of the parabola that formed in early September to bring it this high.

Should Bitcoin lose the parabola, conventional technical analysis wisdom would suggest the cryptocurrency could retrace 60-80% of the parabolic move higher. Applied to Bitcoin’s current situation, that would suggest a move toward the $11,000-12,000 region, which analysts say Bitcoin should reconfirm as support before heading higher.

Fortunately for bulls, the chart also suggests that bitcoin is in the midst of forming an ascending triangle pattern that matches up almost perfectly with the parabola. Ascending triangles are bullish chart patterns often spotted in bull markets. They often break higher after an asset trades in a tightening range. 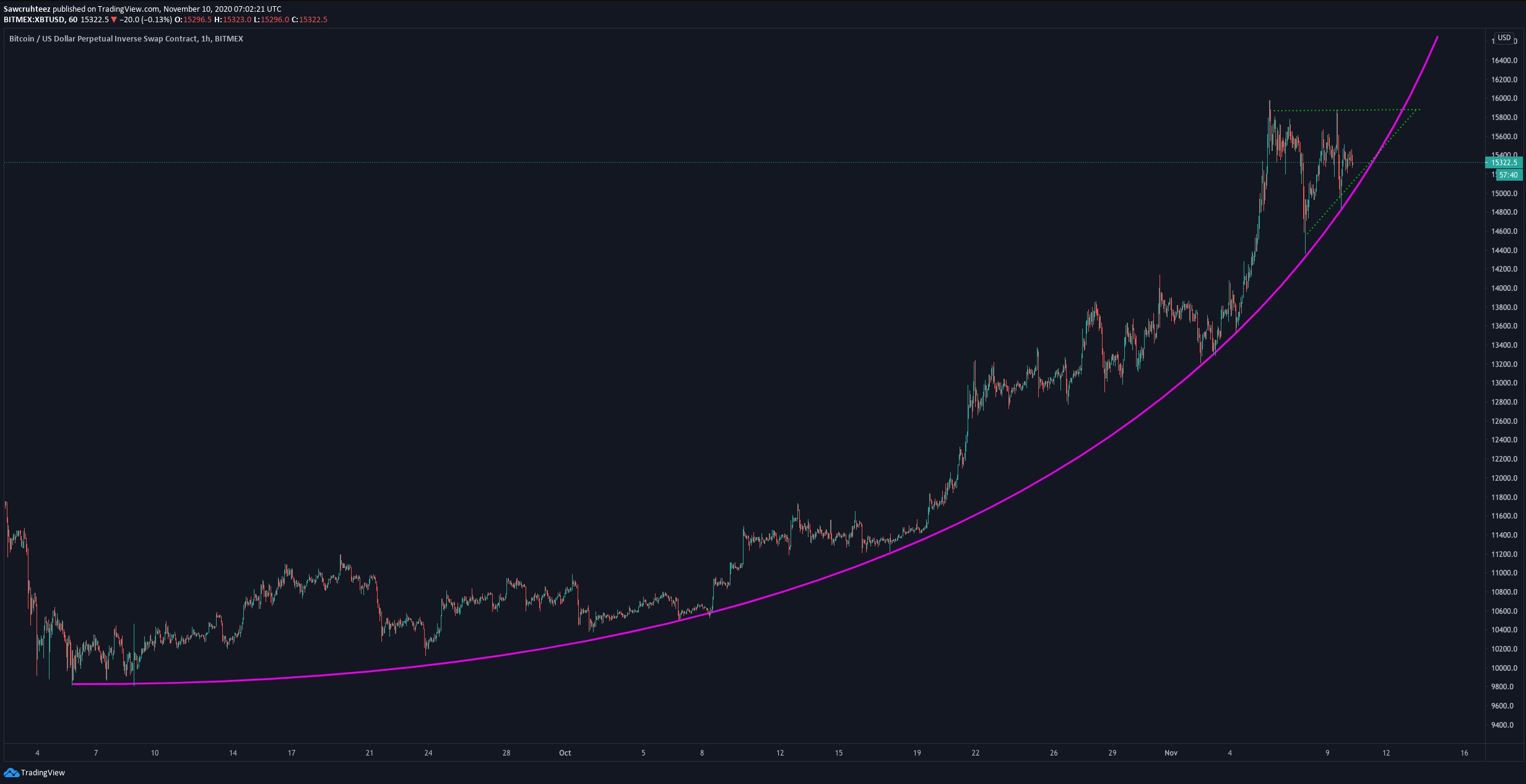 Chart of BTC’s price action over the past three months with analysis by crypto trader Tyler Coates (@Sawcruhteez on Twitter).
Source: BTCUSD from TradingView.com

Related Reading: Tyler Winklevoss: A “Tsunami” of Capital Is Coming For Bitcoin

One trader recently said that he is eyeing a move toward $17,000 or $18,000 as Bitcoin holds key support levels on a weekly basis:

“I think there’s a decent chance bitcoin breaches $17k and even into $18k in the next 10 days (next weekly candle). We are due for a decent mid timeframe blowoff and chill for a bit and wicking into the ATH cluster just feels so right… The path to $18k or ATH wick seems the path of least resistance. Nobody wants to sell until then and everybody is buying dips. Easiest way to create market balance is to do it quickly then let the market chop around a bit.”

There are also fundamental news events like billionaire investor Stanley Druckenmiller supporting Bitcoin that should drive a move higher.