Although there are suggestions ethereum’s and bitcoin’s valuation is largely speculative, data analysis has in fact shown strong correlation between the price of eth or btc and Metcalfe’s law of network effects.

Data analysis has indeed shown such correlation is so strong “in any other field… [it] would be considered witchcraft.”

The analysis undertaken by Clearblocks is not at a level of scientific scrutiny, but they propose a new Price-to-Metcalfe Ratio (PMR), which can operate somewhat similar to a price-to-book ratio in equity analysis.

They claim PMR “appears to be a rather strong leading indicator that accurately predicted 3 of bitcoin’s largest corrections when using a PMR of 1.0 as the cutoff. Using a PMR of -1.25 we can also identify potential accumulation zones.” 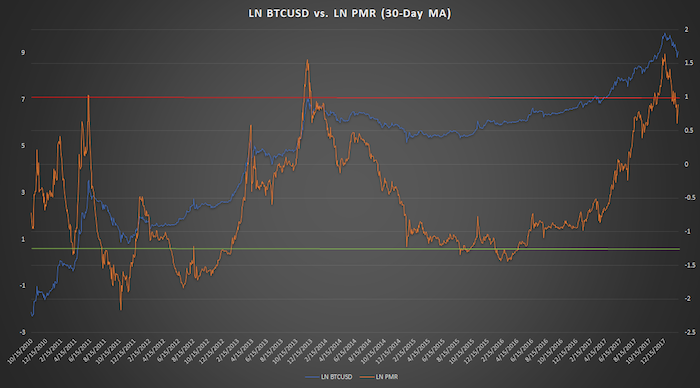 The above suggests bitcoin was considerably overvalued in December and remains overvalued, with PMR under the green line suggesting a strong buying opportunity.

For eth “a PMR of 1.0 accurately predicted 4 of ETH’s major corrections while a PMR of -0.25 appears to identify strong buying opportunities,” the analysis says. 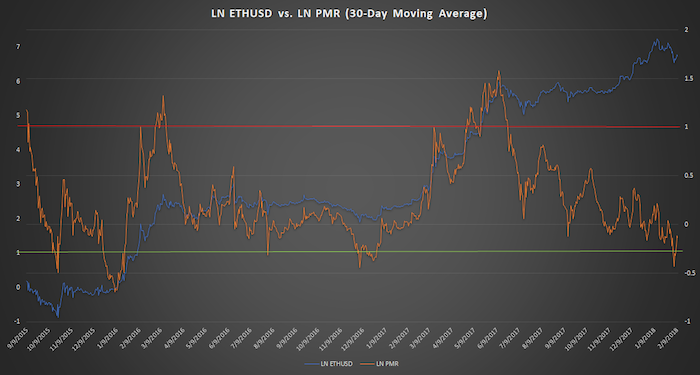 The above indicates ethereum is in a strong buying zone, but its price short term can be affected by bitcoin with PMR failing to predict eth’s December crash because it was primarily due to bitcoin.

That might suggest either the analysis is not wholistic, or that it does not take into account short term price movements, or that the market is being somewhat irrational in tying eth’s value to bitcoin’s when their fundamentals suggest a very different story.

Ken Alabi, who found a correlation between Ethereum, Bitcoin and Metcalfe’s Law of network effects, sort of predicted in December the crypto crash in an update on the Metcalfe’s law analysis, stating:

“There is likely to be at least one major correction in the market cap of blockchains. An update to that study, including data up until this month, shows that the value has indeed outstripped its adoption.

However, the extent is not as great as during the 2014 bubble and as such the correction is unlikely to be as severe.”

A crash of some 75% for bitcoin did indeed follow, affecting most cryptos. With this new analysis, as well as the technical analysis yesterday, suggesting it might continue for bitcoin while eth and others might be undervalued.

But considering they follow each other so fairly closely, a multi-dimensional analysis might perhaps be needed, unless time shows the attachment to btc was just an emotional hiccup that eventually gets corrected by the market.