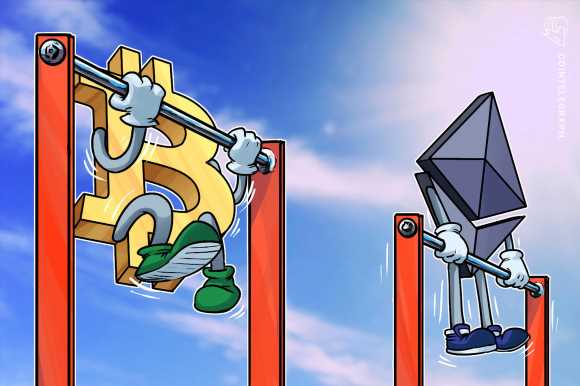 Ethereum is seeing renewed interest in the aftermath of Bitcoin’s travails this week, with Ether’s 24-hour trade volume topping BTC’s by a significant margin.

However it’s still a long way from doubling Bitcoin’s volume as some ETH proponents suggested. On May 25, a screenshot of CoinGecko data circulated across Crypto Twitter showing the daily volume of Ether had surpassed $115 billion while Bitcoin’s sat at nearly $53 billion.

Speaking to Cointelegraph, CoinGecko’s co-founder and COO, Bobby Ong, revealed the data depicted in the screenshot was not accurate due to either an API error, or wash-trading, resulting in inflated ETH volumes reported by the EXX exchange.

Ong stated that Coingecko has since disabled its data feed from EXX. The platform now shows Ether has driven 20% more volume than BTC over the past 24 hours with roughly $60 billion trade compared to Bitcoin’s $50.2 billion.

While CoinGecko’s Bitcoin page has seen about 75% more traffic than its Ethereum page over the past seven days, the gap has narrowed significantly in the past 24 hours. Ong noted:

The surging trade activity and interest has also coincided with institutional fund manager Grayscale’s Ethereum Trust (ETHE) seeing its premium over spot Ether prices bounce up to 11%. while the firm’s Bitcoin Trust has traded at a discount since March. The data suggests that some institutions have turned their focus to Ethereum rather than Bitcoin.

Ethereum’s volume surged to overtake Bitcoin just days after segments of a leaked report from Goldman Sachs revealed the global investment bank believes Ether has a “high chance of overtaking Bitcoin as a dominant store of value.”

The report noted the growth of the burgeoning decentralized finance and nonfungible token ecosystems being built on Ethereum, as well as ETH’s dominance over Bitcoin by total transaction volume.