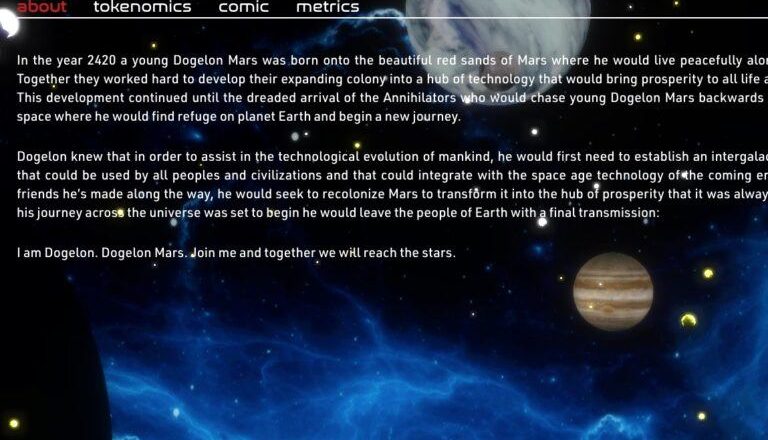 Non-custodial trading platform StealthEX, which works with multiple centralized crypto exchanges, has announced that it now supports Dogelon Mars ($ELON), which is one of the most popular new dog meme cryptocurrencies.

Here is the backstory for Dogelon Mars:

“In the year 2420 a young Dogelon Mars was born onto the beautiful red sands of Mars where he would live peacefully alongside his family. Together they worked hard to develop their expanding colony into a hub of technology that would bring prosperity to all life across the galaxy. This development continued until the dreaded arrival of the Annihilators who would chase young Dogelon Mars backwards through time and space where he would find refuge on planet Earth and begin a new journey.

“Dogelon knew that in order to assist in the technological evolution of mankind, he would first need to establish an intergalactic currency, one that could be used by all peoples and civilizations and that could integrate with the space age technology of the coming era. Then, with the friends he’s made along the way, he would seek to recolonize Mars to transform it into the hub of prosperity that it was always meant to be. As his journey across the universe was set to begin he would leave the people of Earth with a final transmission: I am Dogelon. Dogelon Mars. Join me and together we will reach the stars.“

According to the Dogelon team, 50% of the $ELON token supply was “donated to Vitalik Buterin as a gesture of peace who then later gifted his tokens to charity” and the other 50% was “permanently locked in the Uniswap liquidity pool.”

On November 11, StealthEX announced that it had listed $ELON.

This news came just two after SimpleSwap, which is a similar non-custodial crypto trading platform, announced its support for $ELON: