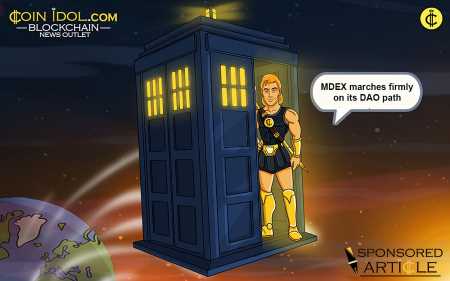 DAO is a new form of production, organization and management. It allows participants to manage an organization in a decentralized way, without a clear final decision maker. All decisions are made collectively through voting. DAO is an open form of management, and its members are mobile and have the ability to grow and expand.

Since its birth, DAO has always been applauded by the crypto world. Ethereum started from DAO and its exploration of DAO has not stopped. The inevitability of its logic perhaps lies in the fact that blockchain applications such as DeFi, which are carried out in a decentralized manner, must have a matching management system, and the decentralized autonomous organization DAO is the natural choice.

Mdex DAO: maximizing the decentralization and vitality of governance

Just like the interplay of productivity and production relations, decentralized applications are bound to adopt the governance of DAO when they develop to a certain level. Maker, one of the most successful DeFi projects, has the most established DAO organization, Maker DAO. Those institutions with top-tier crypto artwork are likewise top-tier DAO organizations.

Being  an emerging mainstream Dex that emerged this year, Mdex has become one of the few Dex with the largest trading volume and TVL. The average daily trading volume reaches as high as $900 million and the TVL is over $2 billion. Such radiant performances can be attributed to its excellent development and operation.  Furthermore, MDEX team had always been planning to adopt DAO governance and not long ago, Mdex’s DAO was finally launched and activated.

The Mdex DAO is composed of members who lock in MDX in the Boardroom. DAO members can use their lock-in vouchers xMDX to collectively vote on community proposals and decide on matters for the Mdex project. Since the launch of the Mdex DAO, DAO members have locked in up to 400 million MDX, more than half of the current MDX in circulation, and the Mdex DAO has over 18,000 participants.

Mdex DAO members are divided into ordinary DAO members and the board of directors. DAO members have the right to propose and vote, and after the proposal is approved by more than 5 directors, it will enter the referendum stage. The Board of Directors is composed of 9 seats voted by the general DAO members and the election takes place once a month, which maximizes the decentralization and vitality of the community and DAO.

Mdex DAO is a gradual and orderly advancement made. Upon its launch, the team selected DAO members and introduced the Boardroom lock-in mechanism to find users who are willing to hold MDX for a long time. For this purpose, the returns of liquidity mining and trading mining were very high, and users who chose to lock in MDX had very high expectations for Mdex.

During the implementation over the past months, MDEX has made further improvement and changed the Boardroom lock-in from fixed to demand term. According to this new scheme, long-term stakers will enjoy higher lock-in rewards. The team has also announced the detailed plan of DAO, all of which help to differentiate ordinary users from loyal fans.

Letting the community and DAO decide the project development requires DAO members to share a similar vision and common interests. Mdex has adjusted its Boardroom lockin mechanism and completed this process, laying the foundation for a great DAO.

DAO members have ever since submitted a large volume of proposals (as many as 300) that involve technical solutions, tokenomics models, cross-chain development, etc. There are 8 proposals that have entered the voting referendum, and most of them have been implemented or are in the process of implementation.

Besides, the proposals are submitted in multiple languages, embodying the rich diversity of MDEX DAO members, the openness of the community and the global growth of Mdex. 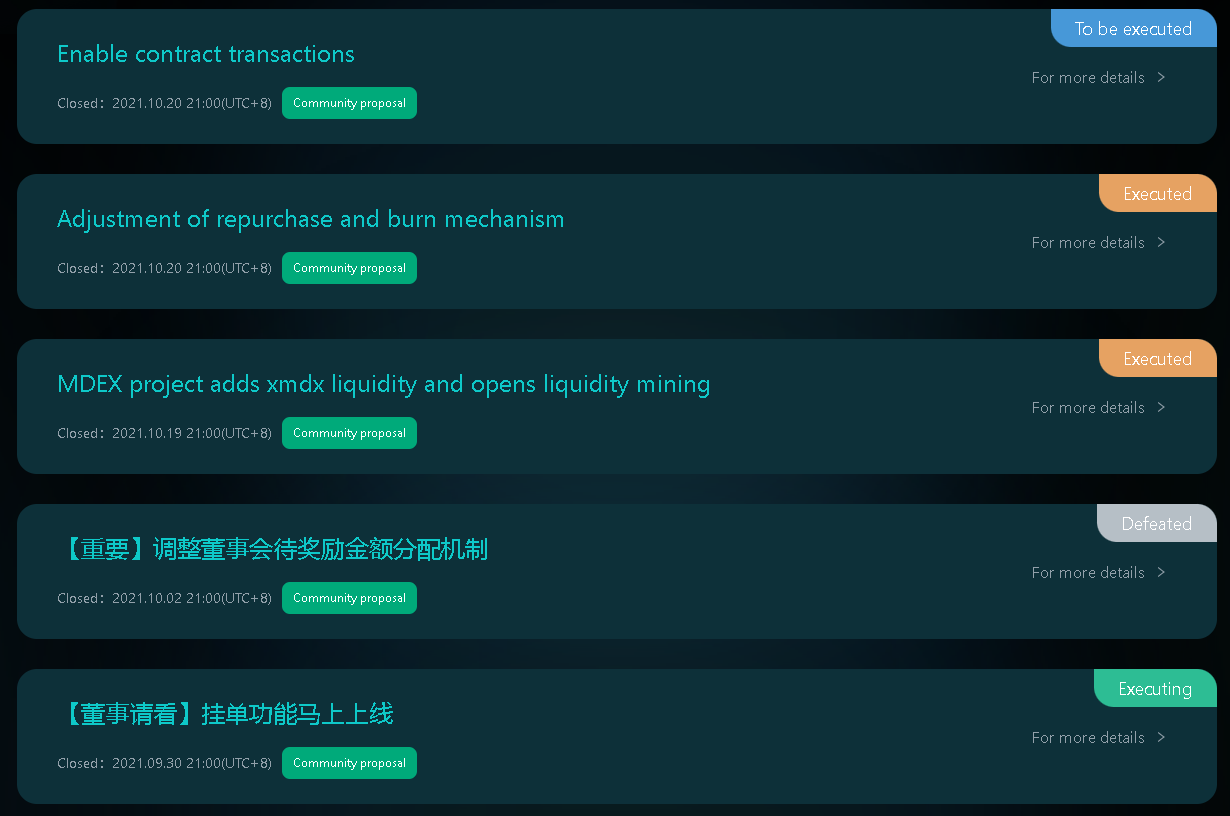 These proposals show that DAO has become a good channel for the community to express their opinions and demands. Through the community voting system, the development team is able to clearly know what the community thinks, which not only allows Mdex to grow more healthily but also inspires it to make more innovations and seek more possibilities.

The members of the Mdex DAO, as managers of the Mdex project, enjoy the dividends of the project’s development, but also must pay the cost of their governance rights and potential governance missteps. They capture the value of DAO governance by locking up their MDX positions and temporarily giving up this portion of liquidity as a price for long-term benefits.

While for DAO members who participate in the project governance, they are entitled to receive the benefits of their labor, which will be realized through the value capture of DAO governance. According to the MDEX tokenomics, a significant portion of MDX will be allocated to users who have locked in MDX in the Boardroom. Through effective governance, they can increase MDX token price and thereby increase their revenue.

Meanwhile, MDEX also supports single token staking to mine platform tokens of higher value, such as HT and BNB, during the specified period. The liquidity of MDX locked in the Boardroom is not completely fixed either. With their lock-in vouchers—xMDX, users can also participate in Mdex’s IMO to make up for the missed opportunity cost during the MDX lock-in.

And according to the roadmap previously released by the Mdex  team, it plans to release more products such as derivatives, stable coins, foundations to support other projects, etc., to empower the Mdex DAO. Any revenue from the products will be  returned to MDX holders in the forms of rewards, repurchase and burn, etc. And Mdex DAO, as the decision maker and biggest contributor of these decisions, can capture even more value from them.

The DAO mechanism has brought new dynamics to Mdex. By gathering people who want to make a difference and make Mdex better, it drives the development of Mdex. At the same time, Mdex manages to realize the decentralization of governance through DAO. Delegating the governance rights to the community level inspires the community members and further sparkles the energy of the entire Mdex community, because only with more communication, fresh ideas, and innovations will happen. Blockchain technology is a fluid and open system, and DAO is the energizer.

Disclaimer. This article is paid and provided by a third-party source and should not be viewed as an endorsement by CoinIdol. Readers should do their own research before investing funds in any company. CoinIdol shall not be responsible or liable, directly or indirectly, for any damage or loss caused or alleged to be caused by or in connection with the use of or reliance on any such content, goods or services mentioned in this article.