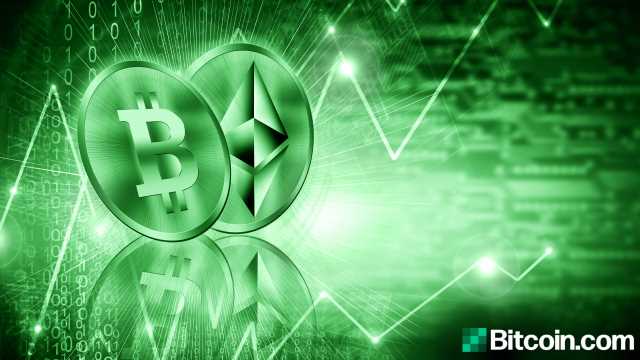 Bitcoin and a number of other cryptocurrencies have regained some of the percentage losses they suffered this past Monday, as various crypto assets are up today between 5-25% in value. On Monday, the crypto economy dipped under the $800 billion handle after the entire market cap fell from its trillion-dollar valuation. Today, the overall market valuation of all 7,500+ digital assets in existence is hovering just above the $900 billion mark.

Digital currency markets saw some deep losses this past Monday, as the trading sessions on January 10 and into Monday saw crypto assets lose anywhere between 25% to 40% in value. For instance, the price of bitcoin (BTC) slid from a value of $41,056 per unit to $30,261 per BTC shedding over 25% in fiat value.

Today, however, the crypto asset’s value has improved a great deal jumping over 6% during the last 24 hours. BTC has done considerably well over the long run as the crypto asset is still up 3.1% over the week, 82% for the month, 206% for the 90-day span, and 332% against the USD for the year. At the time of publication, BTC is trading hands for prices between $34,600 to a touch over $35,000 on Tuesday afternoon. Litecoin (LTC) is trading hands for $139 per LTC and is up 10% during the course of the day. Bitcoin cash (BCH) has gained 8.5% as each BCH is swapping for $470 on Tuesday afternoon (EST). Overall cryptocurrency trading volume worldwide today is up 14% and there’s $93 billion in global swaps.

Peters further explained that many skeptics will call bitcoin a “bubble” but BTC’s long-term outlook remains very strong. “Many detractors were quick to believe the bitcoin bubble had popped, as the price seemed destined to fall below $30,000 but this failed to materialise,” Peters explained in a note to investors.

“As a result, enthusiasts declared victory, arguing that $30,000 is a new bottom for the crypto asset. In my view, it is too early to say. Although we remain in a price range we haven’t seen before, some of the rises and falls we’re seeing in this current crypto bull market were also present in the 2017 bull market,” the Etoro analyst added.

Furthermore, in the recent “Coin Metrics’ State of the Network: Issue 85,” the research company mentioned BTC’s reaction to the January 6, 2021, Capitol breach events in the U.S.

“Bitcoin’s quick reaction to events on January 6th shows its continued maturation as an asset that responds to global events,” Nate Maddrey and the Coin Metrics Team wrote. “It also potentially adds evidence to the narrative that bitcoin is sometimes viewed as a hedge against global unrest. But the run-up to $40K also occurred on the tailwind of a strong run to start the year so it can be difficult to untangle the exact impact of January 6th’s events.”

Meanwhile, the notorious gold bug and economist, Peter Schiff, scoffed at bitcoin’s big losses this past Sunday. “Bitcoin traded near $42K on Friday and near $30K on Monday,” Schiff tweeted. “An asset that drops 28% over a weekend is not a safe-haven, a store of value, or a viable hedge against inflation. If you want to gamble on bitcoin, buy Bitcoin. But if you want to hedge against inflation buy gold,” Schiff added. Following that statement Schiff also said:

Of course, a number of crypto assets said that Schiff was just talking about bitcoin to gain some attention, and they believe this is why the gold bug often discusses the cryptocurrency so regularly. “It sounds like bitcoin is helping you grow your following more than gold at this point,” one individual responded to Schiff’s tweet about bitcoin. “It seems like that’s where the real value to you is. Ironic. Appreciate the warnings, if you’re right, and forgive you if you’re wrong. Best of luck,” the person added.

Schiff replied back and said that he’s been trying to get people to jump off the bitcoin bandwagon. “It’s hard to tell, but my guess is that I would have even more followers if I got onboard the bitcoin train, rather than trying to convince others to jump off,” Schiff said.

Meanwhile, today’s top token gainers include coins like stakenet, district0x, genaro network, dmarket, and nano which are up between 40% to 91% today. Tuesday’s biggest losers are tokens such as golem, bitnautic, everex, acute angle cloud, and coinmeet. Those five tokens have seen percentage losses between 5% to 19.99% on Tuesday afternoon.

Check out all the latest cryptocurrency price action in real-time at markets.Bitcoin.com.