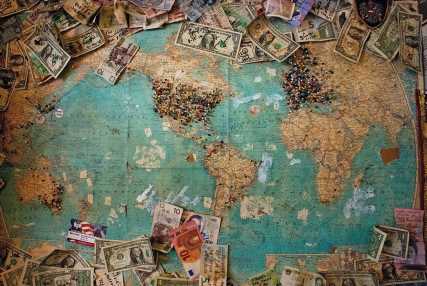 For a network that allows final settlement of sound money, there’s no better marketing tool than a central bank balance sheet. That’s the reason for this popular saying in the Bitcoin community: Central bank policies are Bitcoin’s ad campaign. Governments keep printing money, causing inflation, and devaluating the bills in your pocket. As long as that keeps happening, Bitcoin will become more attractive.

Bitcoin’s price chart might be vertical right now, but governments all over the world are printing and printing as you read these lines.

Let’s look at the Dollar, for example:

How Does This Central Bank Balance Sheet Relate To Bitcoin?

The pink line and the yellow candles are inversely correlated. This goes hand in hand with Plan B’s infamous S2F model, Bitcoin’s supply and Bitcoin’s price are locked in so far. This speaks to digital scarcity and to the unmovable fact that there will only be 21M bitcoin. How many Dollars will there ever be? Nobody knows. But “an incredible ever-increasing amount” is a fair bet.

The blue area inside the white line is a representation of the central bank balance sheet. The steep line unnaturally pointing up that begins in 2021 corresponds to the stimulus packages in response to the COVID crisis. The already rampant money printing got to an extreme only seen in developing economies that don’t control their own destiny.

As long as Central Banks are printing trillions in fiat no one can stop #Bitcoin #Bitcoin is the consequence of irresponsible Government policies and Central Bank printing pic.twitter.com/GJMfFL1nkC

Make no mistake, unlike other currencies, increases in the US Dollar’s money supply affect the whole world. Directly to dollarized countries like El Salvador. Indirectly to every country that uses the dollar as a reserve currency. And people from these countries don’t even get a stimulus check in the mail as a consolation prize.

Another interesting thing about the chart is that, lately, Bitcoin’s price seems to have lost correlation to the dollar’s rampant money printing. Does that speak to a coordinated attack to sink bitcoin’s price? One could argue the point.

One could also argue the point this reader makes:

Log if I am interpreting this right, Bitcoin always overshoots the G4 total balance sheet and this if repeats, will easily take Bitcoin across to 1 million.

But take that last one with a grain of salt. And remember that these articles are never financial advice. Do your own research. What Can We Do To Safeguard Ourselves From Money Printing?

Governments around the world will keep printing bills and more bills, there’s not much anyone can do about that. However, you can safeguard your money from debasement by investing it in a hard asset. And what’s the hardest asset that humanity has ever created? You guessed it, it’s Bitcoin. To put this into perspective, let’s quote Saifedean Ammous’ “The Bitcoin Standard”:

“The ratio between the stock and flow is a reliable indicator of a good’s hardness as money, and how well it is suited to playing a monetary role.”

And The Bitcoinist Book Club’s take on that quote and book:

If it’s difficult to produce new “monetary units,” that’s “hard money.” If it isn’t, then it’s “easy money.” Over time, people who use hard money will tremendously outperform people who use easy money. A constant increase in the supply will erode the purchasing power of the easy money, it’s as simple as that. The law of supply and demand never fails.

Bitcoin is “difficult to produce,” that’s one of the reasons it works. The energy it takes to produce bitcoins, and to sustain and protect the Bitcoin network, give each coin its value. Or, as  Saifedean Ammous himself put it:

Replacing the easy money of central banks & the unlimited power it’s given to modern governments over their citizens with a free market automated monetary system is truly priceless. No amount of electricity consumption is too high a price to pay.

And now you know why Bitcoin is so important to humanity. And why your fellow men’s purchasing power keeps decreasing over time.