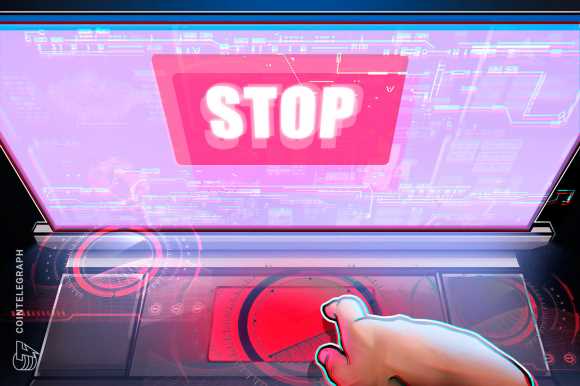 Binance confirmed the move on May 13, with spot trading for LUNA/BUSD and UST/BUSD trading pairs being suspended. It’s not clear when the withdrawals for LUNA and UST will continue, as the crypto exchange simply stated that it will wait for the issues with the Terra network to be solved.

It is the latest move by the world’s largest cryptocurrency exchange by trading volume following one of the most significant black swan events to hit the space since the inception of Bitcoin (BTC) in 2009.

Binance Futures delisted coin-margined LUNA perpetual contracts on Thursday despite plans to salvage the floundering LUNA and UST. Terra blockchain validators were forced to take the network offline on May 12 in an effort to stem potential governance attacks following the crash of the network’s LUNA token.

Related: Untethered: Here’s everything you need to know about TerraUSD, Tether and other stablecoins

Terra’s LUNA and its algorithmic stablecoin Terra USD suffered a dramatic crash on May 10, as UST lost its $1 peg. The system was designed to automatically maintain its peg to the U.S. dollar – with the failure leading to a systematic devaluing of UST while LUNA tokens began to be minted at an unprecedented rate.

The crash was cataclysmic, as the value of LUNA sunk 95% in space a week. Terra founder Do Kwon released a short-term roadmap to try and revive the ecosystem. The proposal entailed burning $1.4 billion UST while staking 240 million LUNA tokens in an effort to stem the devaluation of the UST $1 peg.

This article is developing and will be updated as new info is available.