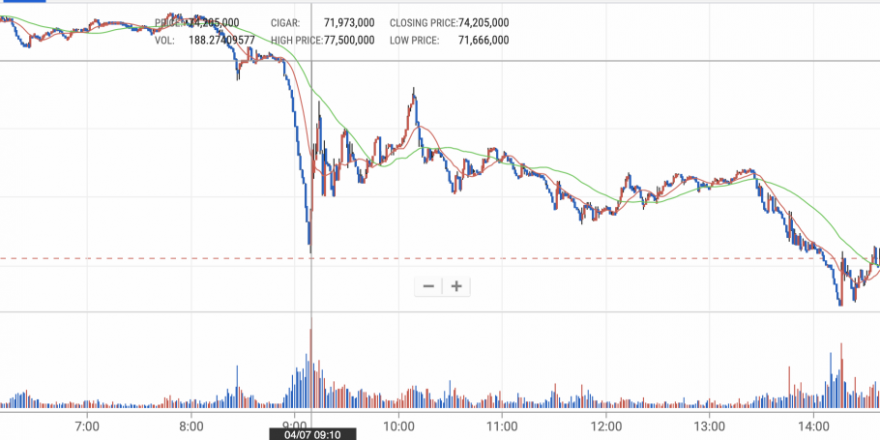 Bitcoin’s premium in South Korea has been reduced by a sudden sell off that significantly affected bitcoin’s price in Korean Won (KRW), but not in USD at the time.

It looks like at around 9AM euro time, there was a huge market sell off on Upbit, South Korea’s biggest exchange which handles $20 billion in trading volumes a day.

In just one minute, which we have highlighted above, 182 bitcoins were sold, worth $10 million.

Another big South Korean exchange likewise showed a significant fall in price while US markets were not affected at the time.

Bitcoin’s price in South Korea fell by seven million won at 9AM euro time, from 77 million won to 70 million.

That translates to $6,200, however as can be seen above, there was no sharp drop and then some recovery in western exchanges as there was in Korea.

That recovery in Korea then gave way to a more global movement with bitcoin down by about $2,000, while in South Korea it went to that 70 million after it bounced to 75 million following the first sharp drop.

That means there’s still a considerable premium as 70 million won is worth $62,600, while the global price is currently at $56,500 as can be seen above.

The premium thus has been reduced, but it’s no where near being wiped out yet. So we’ve got a very interesting situation because there has been no drastic change in the USDKRW exchange rate to explain this movement.

In addition the fact KRW pairs were affected while USD pairs were not affected at all, at least initially, suggests someone has found a way to arbitrage this huge premium.

If that is the case, then the dollar price of bitcoin should rise because they have to buy the bitcoin in usd – or euro, which is irrelevant as either would be insta-arbed – and then they have to sell it for krw, finishing off by converting the krw into usd.

That’s the easy part, the hard part is by how much should it rise de minimis? South Korea is a very big bitcoin market, so we have to estimate it makes up maybe 10% or perhaps even 20% of bitcoin’s price.

That’s a lot, so bringing in more complications because how much would this reduction in price there increase demand?

Also, is this some guy with dollar/krw vans coming and going, or is there a pipeline that eventually – once the huge current premium is arbed – will keep insta arbing it. If the latter, how much will this new efficiency add to the price?

Finally, presuming rationally everyone should expect price to increase as this arber presumably is going to come and buy bitcoins, how much will speculation or frontrunning add to that price increase?

Once upon a time (2016 or early 2017?), Bitfinex was in big trouble, everyone wanted out, so they bought bitcoin and any other crypto to get out as soon as possible instead of waiting for snail fiat.

Eventually the situation was sorted out so we had a big spectacle of watching the arb race in real time, with it over in about 2-3 hours.

If we recall, and obviously you can look at the charts for full detail, price fell on non-finex exchanges at first. Why? Why did the global price fall if we are arbing Korea?

Well, because price fell on Finex – in Korea – so bots etc on other exchanges still reacted to it. Then price went speedily up, but not nutsily and all ended pretty quickly.

So, obviously we may be completely wrong as there can be other things that affect the price, but in isolation and if Korea is indeed being arbed then this should get above $60,000 with the situation then ending, but the big unknown here is whether Korea is really being arbed or this was just some guy instead of some system/pipeline.