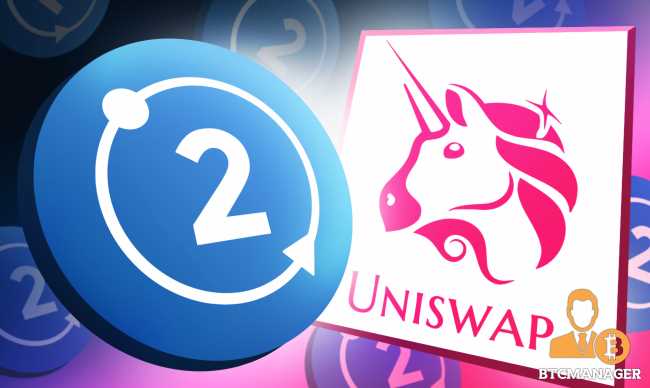 November 15th, 2021, Madrid, Spain — B2M, the utility token developed by Spanish cryptocurrency platform Bit2Me, is now available on Uniswap. Uniswap is the largest decentralized cryptocurrency exchange in the world, with a volume of more than $16 billion per week. The listing means B2M can be purchased from any country without the need to register on the platform.

Uniswap’s liquidity is perfect for those who wish to conduct large-scale transactions. These types of decentralized finance (DeFi) platforms create new financial paradigms based on blockchain technologies.

Until now, B2M could only be bought and sold on Bit2Me and Bittrex, where, just 15 days after its launch, more than $150 million had been exchanged, bringing its market capitalization to around $1 billion.

Now, B2M fully opens the door to the long-awaited decentralized exchanges with Uniswap, the most popular platform, with more than 3 million users. The platform does not require prior registration or permission to be used and can be used by anyone, from any country at any time, using cryptocurrencies.

Bit2Me’s goal with this listing is to exponentially grow its B2M holder base, which currently stands at around 40,000. Through Uniswap, B2M will reach millions of users who are currently unable to access the utility token. Moreover, Uniswap is only the first of many DEX and CEX listings for B2M to come.

Speaking about the listing, Koh Onozawa, CIO of Bit2Me said:

“This action is part of a very large strategic roadmap of the company, in which Uniswap is just one of the many listings and partnerships that the company will execute to give access to the token to tens of millions of people and generate hundreds of new use cases.”

B2M is the largest ICO launched to date in Spain, and the first token created in Spain to reach $1 billion in market capitalization. It has had daily exchange peaks of $30 million, being part of the Bittrex top on 5 different occasions in less than two weeks, reaching almost 15% of the daily volume exchanged by the entire platform.

B2M raised €20 million in its ICO, launched in September. In total, it raised €2.5 million in an initial private round and €17.5 million in less than three minutes during the three phases of the ICO, quite a historic starting point to begin trading in the cryptocurrency markets, something it has done since last November 1. Today its price is 15 times higher than it reflected in the first phase of the ICO.

B2M offers advantages to users of Bit2Me’s cryptocurrency platform. B2M token holders can have a say in the development and approach of new products of the company (governance), as well as bonuses of up to 90% when making transactions on the platform and refunds on purchases made with Bit2Me Card in its partner network.

Bit2Me Card is a Mastercard debit card that allows you to pay in both cryptocurrencies and euros. Payments can be made at all establishments that accept Mastercard.

In this way, Bit2Me makes it easy and accessible to use cryptocurrencies in everyday life. Bit2Me users with a Bit2Me Card will be able to pay in any of the 69 cryptocurrencies that the Spanish company offers on the virtual currency platform, a service that will soon be available.

Bit2Me has 120 employees. Leif Ferreira is the CEO and founder of the company, and Andrei Manuel is co-founder and COO. Bit2Me’s staff is also composed of leading technology and blockchain personalities.

In addition, Bit2Me counts with recognized members of the industry, such as the former CEO of Coinbase Europe (a $100 billion listed company) or Baldomero Falcones (former President of Mastercard International).

For more on Bit2Me’s innovative suite of products, B2M, and how it is disrupting the cryptocurrency exchange industry, visit their website here.