Home » Business » ‘Zoom is fine, but it can’t match being back in the office’

Temperature checks at reception, spaced-out desks, contactless coffee dispensers and plastic lift-button prodders. Welcome back to work – in an anti-Covid-19 office. These features, which would have been deemed eccentric and invasive in January, are some of the measures being deployed for returning employees by one of the UK’s biggest companies, property firm British Land.

And many more businesses will have to take heed if the UK is to reverse its position as one of the slowest European countries to get its feet back under the desk. Only a third (34%) of UK white-collar employees have gone back to work, while in continental Europe almost three-quarters of staff (68%) have done so, according to analysis from US bank Morgan Stanley.

From last week, companies in England have been able to decide whether employees can return to the office – safely. British Land is one major employer actively trying to get some staff back. On any given working day, up to 30% of the 300 employees at its central London headquarters are at their desks, using the hand sanitiser dispensers and one-way systems now common in public spaces.

Unusually among office-based firms, it began to allow workers back on a voluntary basis in June. The guidance in Scotland, Wales and Northern Ireland remains for people to work from home where possible.

Early reports, and a Guardian analysis, suggest many employers based in England, including financial, law and energy firms, are sticking to home working until at least September; some companies, including Google and NatWest, have delayed a return until 2021.

On their first day back in the office, each British Land employee is presented with a branded pouch containing a mask, a digital thermometer and a plastic lift-button pusher, with a note thanking them for their commitment. 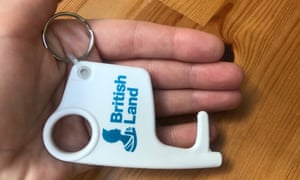 British Land’s more enthusiastic embrace of the return to the office is perhaps unsurprising. Standalone office buildings and what the company calls “campuses” in central London – a mix of offices and public spaces – account for almost two-thirds (61%) of its property portfolio, which also includes shopping centres such as Sheffield’s Meadowhall.

On a tour of head office, chief executive Chris Grigg says the company’s policy of keeping its buildings open during lockdown, even while unoccupied, and its own return to its headquarters, have given it insight into how best to prepare sites for the return of workers.

Not all measures are visible: British Land has made alterations to heating and ventilation systems, which are potential pathways for a virus travelling through a building.

On the day the Observer visited, Nigel Webb, head of developments, and learning and development manager Matt Buxton were among those who had opted to come in to work. Along with other colleagues at spaced-out desks in the open-plan office, or in meeting rooms, Webb and Buxton say this makes them feel more productive and able to collaborate with colleagues.

Other staff have chosen not to come back to the office yet because of “practical examples of bad transport, or childcare”, says Grigg, adding that his experience with his own staff allows the company to be “more in touch” with tenants, who may be returning at a slower pace.

Many big corporates have not rushed to return to their workplaces, and this has affected smaller businesses that provide services to office workers. Despite this, office rental payments have held up: British Land says it collected 88% of quarterly office rent in June, compared with just 36% of retail. The return of UK white-collar workers is likely to pick up, Grigg believes, because certain tasks remain “hard to replicate outside of the office”.

Workers’ mental health could also be harmed by months working and living in the same space, says Grigg, while continued remote working could foster inequality.

“Unfortunately the evidence seems to point to work in this different form of living falling disproportionately on women. The risk is that this becomes another form of inequality: home working is a lot easier if you have access to screens and machines and bandwidth, and if you have a nice study at home.”

The need for social distancing inside lifts makes accessing high-rise buildings more challenging but British Land, which developed the Cheesegrater, the tallest building in the City of London, maintains there is a future for skyscrapers.

Grigg draws parallels with the period following the 2001 attacks on New York’s twin towers, when changes in airline safety restored confidence in high-rise offices. He believes skyscrapers will regain popularity once a vaccine is developed or coronavirus can be controlled.

Ultimately, Griggs believes that an office allows firms to reach intangible goals – such as innovation – in the way Zoom calls cannot. People will have to come back.

He says: “Things like co-operation, innovation, different ways of thinking about doing things are hard to do on your own, and they are hard to simulate even using the most modern communications.”