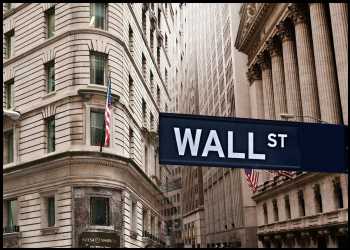 Stocks have moved sharply lower over the course of the trading session on Tuesday, adding to the steep losses posted in the previous session. The Dow initially bucked the downtrend but has since joined the Nasdaq and S&P 500 firmly in negative territory.

Concerns about the outlook for monetary policy continue to weigh on the markets, as the Federal Reserve’s two-day meeting gets underway.

With inflation remaining at an elevated rate, the Fed is widely expected to accelerate its timetable for reducing bond purchases.

Many traders expect the Fed to begin raising interest rates shortly after bringing its asset purchase program to a halt.

Potentially adding to concerns about monetary policy, the Labor Department released a report showing producer prices increased by more than expected in the month of November.

The report said the producer price index for final demand advanced by 0.8 percent in November after climbing by 0.6 percent in October. Economists had expected producer prices to rise by 0.5 percent.

With the stronger than expected monthly price growth, the annual rate of producer price growth accelerated to 9.6 percent in November from 8.8 percent in October.

The Labor Department said the year-over-year spike reflected the largest advance since 12-month data were first calculated in November 2010.

“The Fed has already pivoted to prioritizing inflation, so rather than causing any new inflation panic, this report is just another nail in the coffin for the “wait it out” mindset seen as recently as a month ago,” said Will Compernolle, Senior Economist at FHN Financial.

He added, “Supply chain pressures should ease in the next few months as holiday shopping lets up and producers have more time to adjust capacity, but the impacts on producer prices and then to consumer prices will not be immediate.

Lingering worries about the new Omicron variant of the coronavirus may also have generated some selling pressure after the World Health Organization warned the new variant is spreading faster than previous strains.

Software stocks continue to turn in some of the market’s worst performances on the day, resulting in a 4.4 percent nosedive by the Dow Jones U.S. Software Index.

Significant weakness has also emerged among housing stocks, as reflected by the 1.8 percent drop by the Philadelphia Housing Sector Index.

Semiconductor, networking and retail stocks have also shown notable moves to the downside, while steel stocks are bucking the downtrend.

The major European markets also moved to the downside over the course of the session. While the U.K.’s FTSE 100 Index edged down by 0.2 percent, the French CAC 40 Index fell by 0.7 percent and the German DAX Index slumped by 1.1 percent.

In the bond market, treasuries have climbed well off their worst levels but remain modestly lower. As a result, the yield on the benchmark ten-year note, which moves opposite of its price, is up by 1.5 basis points at 1.439 percent.