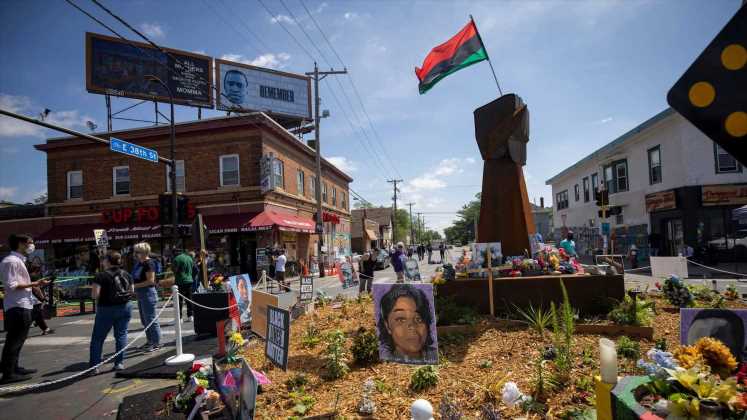 Minneapolis Public Works crews began arriving before sunrise, according to video shared on Instagram by Marcia Howard, a teacher and caretaker of the square. Howard, lives just steps away from George Floyd Square, said she and other community members learned earlier this week that the city was planning to remove the memorial.

“Injustice closed these streets,” Howard wrote. “Only justice should open them.”

Workers placed caution tape around the giant sculpture of a raised first at the center of the intersection of 38th and Chicago, which features murals memorializing Floyd and other people of color killed by police, candles, a community greenhouse and security booths built by activists.

Although the partially cleared roadway is now open to traffic, no vehicles have traveled through the site, MPR News reported. Activists continue to occupy the square and have installed impromptu barricades.

The effort to open the square was “community-led” with the help of The Agape Movement, a nonprofit that stepped in to provide security in the square, according to a statement from Mayor Jacob Frey, City Council Vice President Andrea Jenkins and City Council Member Alondra Cano.

“We are collectively committed to establishing a permanent memorial at the intersection, preserving the artwork, and making the area an enduring space for racial healing,” the statement said.

Minneapolis police spokesperson John Elder told USA TODAY that the department does not have personnel involved in opening the square.

Boots On The Ground: The Black community in Minneapolis finds peace after George Floyd

The struggle to reopen George Floyd Square: ‘Injustice closed these streets; only justice should open them’

The square has become a challenging spot for some city officials, who said the street closure is hurting businesses and making policing the area more difficult.

City leaders pledged to reopen the square after Chauvin’s murder trial, but caretakers of the square vowed to keep the area closed until the city meets their list of 24 demands and the trials of the other officers have concluded.

The demands include recalling the county prosecutor, firing the head of the state’s criminal investigative agency, and spending hundreds of thousands of dollars on programs to create jobs, combat racism and support affordable housing.

City officials said in a statement that they have met on a regular basis with community members to discuss the long-term plan for investing in the neighborhood to “restore and heal the community.”