When Pranab clashed with Manmohan, twice

Pranab Mukherjee’s stewardship of the economy will stand out as much for the manner in which he managed controversies as for creating quite a few of them, says A K Bhattacharya.

Only five finance ministers of India have had the privilege of holding that prized portfolio twice in their career in different stints. Pranab Mukherjee was one of them.

But there was a big difference.

The gap between the two tenures of all other finance ministers — T T Krishnamachari, Morarji Desai, Yashwant Sinha and P Chidambaram — ranged between four and seven years.

For Mukherjee, it was 25 years. That long a gap is testimony as much to his longevity and utility as a politician as to his ability to survive under different Congress regimes.

The performance of the Indian economy during Mukherjee’s tenures as finance minister — from January 1982 to December 1984 and from January 2009 to June 2012 — was hardly spectacular (see table). 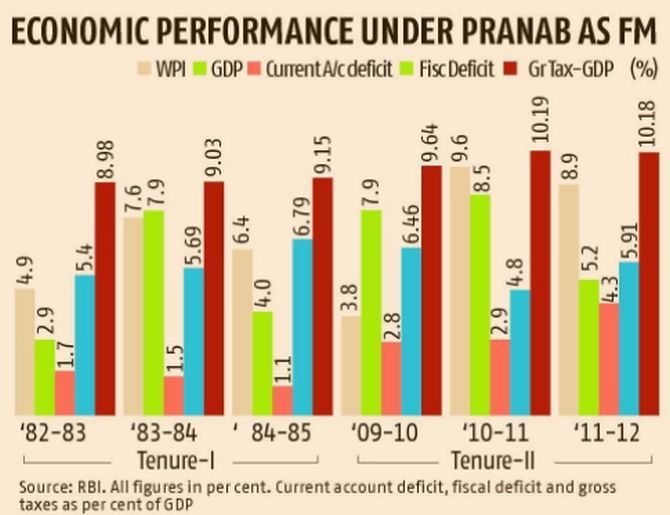 Neither did Mukherjee significantly raise the performance of the economy, nor did he let it go down precipitously.

But his stewardship of the economy will stand out as much for the manner in which he managed controversies as for creating quite a few of them.

Mukherjee’s induction into the corner room of North Block, headquarters of the finance ministry, on January 15, 1982, was preceded by an economic crisis, which also led to a political controversy.

The government had obtained a $5.8 billion loan from the International Monetary Fund in November 1981 to manage its balance of payments situation.

When Mukherjee became the finance minister, only a month-and-a-half was left for him to present his first Budget to Parliament. He rose to the occasion and presented a Budget speech that made a stout defence of India’s decision to seek the IMF loan.

In his first stint, Mukherjee managed the political fallout of India receiving an IMF loan quite adroitly. That the Indian economy began turning around helped him.

Thus, when he presented his third Budget in February 1984, Mukherjee actually made the grand announcement that the government did not need the final installment of the IMF loan as the economy had recovered from its balance of payments crisis and the international body could divert the unused portion of the loan sanctioned for India to countries that may need such assistance.

He also opened doors to non-resident Indians, or NRIs, to invest in the stock markets and in shares of already listed companies in India.

This became controversial as the permission led to the infamous bid mounted by London-based NRI, Swraj Paul, to take over Escorts and DCM.

Rajiv Gandhi, at that time a member of Parliament from Amethi, welcomed NRI investments, but suggested that limits should be fixed on their purchase of shares in Indian companies. Eventually, such limits were imposed to ensure that owners of Indian companies did not feel threatened.

The NRI investment issue also gave rise to a difference of opinion between Mukherjee and Manmohan Singh, who was then the governor of the Reserve Bank of India.

The government had over-ruled the RBI, which had objected to the move on relaxing NRI investment rules. Dr Singh later admitted to a build-up of tension between the RBI and the government on that issue.

Mukherjee crossed swords with Dr Singh one more time. This was in 1983 when the government wanted to allow the controversial and poorly regulated foreign bank, the Bank of Credit and Commerce International, to open a branch in Bombay (now Mumbai). Dr Singh as the RBI governor opposed the move.

The government then issued directives to the RBI to allow BCCI to open a branch in Bombay. Dr Singh was upset.

But the government did not stop at that. Its Cabinet decided to deprive the RBI of its powers to grant licences to banks. In response, Dr Singh sent in his resignation to Mukherjee and to Indira Gandhi.

After some consultation and rethinking, the government retracted its steps and a crisis was averted.

Mukherjee’s return to North Block after 25 years was also against the backdrop of an economic crisis, growth plummeting after a global financial meltdown and the problem of twin deficits (fiscal and current account) rearing its ugly head.

His second term as finance minister will be remembered mostly for his controversial decision to make a retrospective amendment in the direct taxes law that would allow the government to tax overseas companies on their share transactions involving companies with substantial and operating assets within the Indian jurisdiction.

The retrospective amendment in the law became necessary after the foreign owners of Hutchison Essar Limited, a mobile phone company operating in India, sold their controlling stake to Vodafone of the UK at a profit, but the new owners challenged the tax notice served on them and got a favourable verdict from the Supreme Court.

Many of his ministerial colleagues, and even the prime minister, were wary of the adverse impact such a retrospective amendment to the law would have on the country’s climate for foreign investment.

However, Mukherjee stood his ground and went ahead with the retrospective amendment to the relevant tax laws, which also came to be known as the Vodafone tax.

Mukherjee believed that successive governments retaining the retrospective amendment was a vindication of his stance in 2012.

Mukherjee initiated many other moves, like the setting up of the committee on financial sector reforms, headed by Justice B N Srikrishna, and preparing the ground for a public debt management office outside the ambit of the RBI. But during his tenure, these initiatives made slow progress.

Success eluded him even in his other two tax reform measures — the Direct Taxes Code and the Goods and Services Tax. Mukherjee laid the ground for implementing reforms in those areas, but in the end fell short of achieving those goals during his tenure.