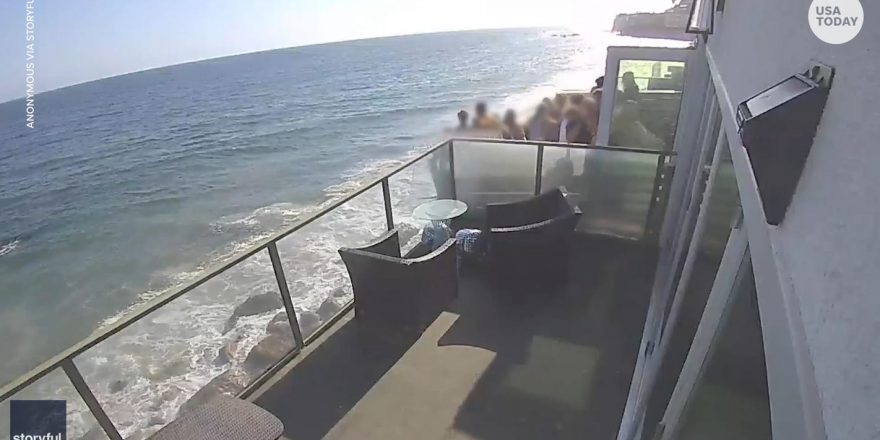 A nearby camera captured the moment a Malibu balcony collapsed on Saturday, sending several people nearly 15 feet down to the rocks and sand below.

The Los Angeles County Fire Department responded to the scene along the Pacific Coast Highway shortly after 5 p.m. on Saturday, according to KABC.

Fire Captain Ron Haralson told USA TODAY nine people were injured, four of whom were transported to a local hospital. He added none of the injuries were critical.

“They could have been critical or maybe even life-threatening because you’re talking about rocks and jagged rocks below. Fortunately, there weren’t any serious injuries,” Haralson said.

The home was being rented out over the weekend for a birthday party, but the owner of the home told CBS Los Angeles only six people were allowed to be at the home. She saidshe learned from neighbors that there were about 30 people at the home.

The homeowner added she tried to get the people to leavebefore the balcony collapsed.

Strong gusts of wind: Man left clinging to rails on a glass-bottom bridge in China after panels break

Fire department officials said there were more than 15 people on the deck when it collapsed and have declared the house uninhabitable.

“We heard a crack, and I literally saw all my best friends and my girlfriend fall 15 feet to the rocks. The deck just literally gave out. It could’ve been a lot worse, but it’s pretty awful,” a witness told CBS Los Angeles.