Home » US GDP grew 6.4% in the first quarter as the economy began to reopen 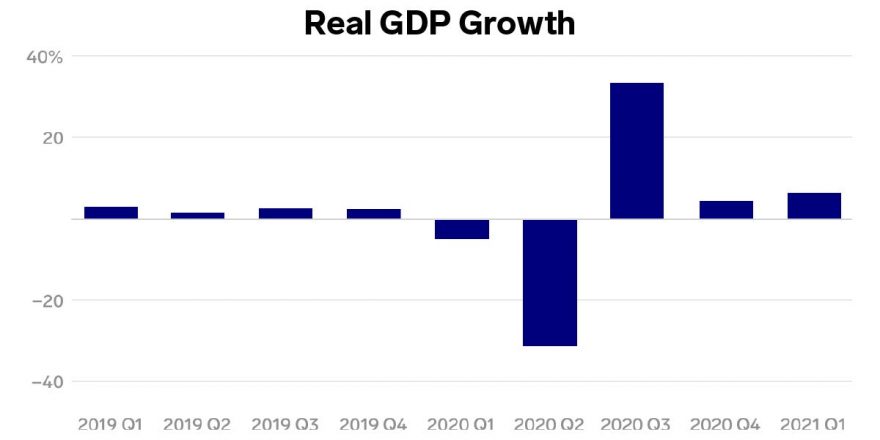 US GDP grew 6.4% in the first quarter as the economy began to reopen

The US economy edged closer to a full recovery in the first quarter of 2021 as vaccine distribution and stimulus reinvigorated spending across the country.

The US’ gross domestic product grew at an annualized rate of 6.4% through the quarter that ended in March, the Commerce Department announced on Thursday. The expansion ranks as the second-strongest pace of quarterly growth since 2003, dwarfed only by a record-breaking rebound in the third quarter of 2020.

The median estimate from economists surveyed by Bloomberg called for an expansion of 6.7% over the three-month period. The jump follows a 4.3% expansion in the fourth quarter of 2020.

The reading represents how much the economy would’ve expanded had its first-quarter growth rate lasted for 12 months. US GDP has now retraced roughly 96% of its pandemic-era decline. Had output expanded at an annualized rate of about 10%, the economy would’ve fully returned to the peak seen in the fourth quarter of 2019.

Nominal GDP, which isn’t adjusted for inflation, rose to $22 trillion. That level surpasses the 2019 peak of $21.7 trillion.

The Commerce Department is scheduled to report two more estimates of first-quarter GDP growth in the coming months. The Thursday report includes preliminary data that can be revised in either of the upcoming releases.

Americans have a handful of boons to thank for the pickup in economic growth. For starters, the average daily rate of vaccination climbed to 2.8 million doses from just 272,000 over the quarter, according to Bloomberg data. The country ended the quarter with about 29% of Americans having received at least one dose and roughly 16% of Americans fully vaccinated.

At the same time, the country emerged from its deadliest wave of virus cases yet. Daily COVID-19 case counts fell from a peak of nearly 301,000 cases in early January to about 68,000 cases at the end of March.

The decline and vaccine rollouts allowed state and local governments to gradually relax some lockdown measures through the quarter. Retail sales bounced higher in January and March as Americans revived some of their pre-pandemic spending trends. Warmer weather also helped service businesses grow at a faster rate after elevated case counts and harsher restrictions halted activity.

President Joe Biden’s election victory paved the way for another large-scale stimulus plan. The president pitched a $1.9 trillion package before his inauguration, arguing it was time to “go big” and that deficit concerns could wait until the economy recovers. The proposal included $1,400 payments, another boost to unemployment insurance, and funding for vaccine distribution.

Democrats passed that measure without any Republican support on March 11, and stimulus checks started hitting bank accounts just days afterward. The package, along with partial reopening and falling virus cases, helped accelerate hiring and economic activity in the final weeks of the quarter.

What comes next, from infrastructure to hiring snags

Despite passing the second-largest stimulus package in US history just weeks ago, Biden hasn’t slowed his roll. The president unveiled a $1.8 trillion spending package on Wednesday that focuses on helping families. The plan includes funds for childcare, free universal pre-K, an extension to the child tax credit, and paid family and medical leave.

The proposal joins a separate $2.3 trillion plan that boasts a greater emphasis on infrastructure. That measure would pay for nationwide broadband, renovation of key roads and bridges, and universal clean water. Taken together, the packages will total more than $4 trillion and could surpass the New Deal in size and scope.

Compared to the March stimulus measure, Biden’s follow-up spending would provide a moderate and longer-lasting boost to economic growth over several years, Robert Kaplan, president of the Federal Reserve bank of Dallas, said on March 31.

“The nice thing and the desirable thing, for me, about infrastructure spending: it’s that it’s a long-term investment,” he said in a Bloomberg TV interview. “It should help, in the future, create higher potential GDP growth, higher sustainable growth, better productivity.”

And although hiring has bounced back after its winter slump, some industries have run up against unexpected hurdles.  Service-industry businesses have faced difficulty in filling job openings, from a Florida McDonald’s paying candidates to interview to ride-share drivers saying they’ll hold out on work for better pay.

The unusual worker shortage is likely a result of expanded unemployment benefits and virus fears leading Americans to put off employment, Bank of America economists said last week. Home-schooling demands could have also played a part. The dynamic, while somewhat concerning, will fade by early 20222 as stimulus dries up and more Americans are vaccinated, the team added.