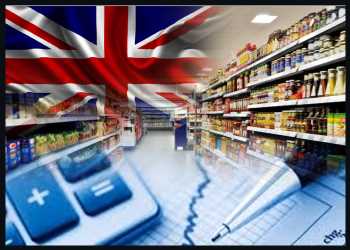 The UK government drastically lowered the economic growth forecast for this year as higher inflation is expected to erode real incomes and consumption.

The latest projections from the Office for Budget Responsibility were unveiled as Chancellor Rishi Sunak presented the Spring Statement in the parliament on Wednesday, announcing several tax cuts to support households and businesses.

Gross domestic product is now forecast to grow 3.8 percent this year, which is much less than the 6.0 percent projected in October. Growth is expected to slow further to 1.8 percent next year, then rise to 2.1 percent in 2024.

Driven by the surge in global oil and gas prices, mainly due to Russia’s invasion of Ukraine, the OBR forecast CPI inflation to peak at close to 9 percent in the fourth quarter of this year, which was 4.3 percentage points higher and two quarters later than the peak in the October forecast.

“This would be the highest level of consumer price inflation in around 40 years when the second oil shock pushed inflation into double digits in the late 1970s and early 1980s,” the OBR said.

The forecast is based on market expectations of further interest rate rises that take Bank Rate to a peak of 1.9 percent by the third quarter of 2023, well above the path in the October forecast, which peaked at 0.75 per cent at the end of 2023.

In the backdrop of high inflation, real household disposable incomes per person is projected to fall by 2.2 percent in 2022-23, the largest fall in a single financial year since ONS records began in 1956-57.

In a bid to support families amid rising cost of living, Sunak announced a 5 pence per litre reduction in fuel duty on petrol and diesel for 12 months.

The chancellor also cut the basic rate of income tax by 1p in the pound in 2024 to 20p, which is the first reduction in 16 years.

“Cutting taxes means people have immediate help with the rising cost of living, businesses have better conditions to invest and grow tomorrow, and people keep more of what they earn for years to come,” Sunak said.

The chancellor raised the National Insurance starting thresholds to GBP 12,570 from July, which he expects to benefit almost 30 million workers, saving the typical employee over GBP 330 in the year from July.

In other measures, the chancellor reduced the VAT on energy saving materials such as solar panels, heating pumps and roof insulation from 5 percent to zero for five years, in a bid to promote energy-efficiency.

The Employment Allowance, a relief which allows smaller businesses to reduce their employers National Insurance contributions bills each year, was raised from GBP 4,000 to GBP 5,000.