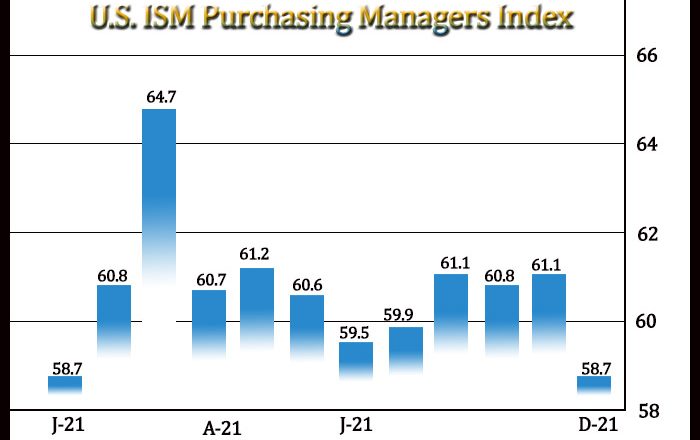 Activity in the U.S. manufacturing sector grew at a slower rate in the month of December, according to a report released by the Institute for Supply Management on Tuesday.

The ISM said its manufacturing PMI slid to 58.7 in December from 61.1 in November. While a reading above 50 still indicates growth in the sector, economists had expected the index to show a much more modest decrease to 60.2.

With the bigger than expected decrease, the manufacturing PMI fell to its lowest level since a matching reading last January.

He added, “However, panel sentiment remains strongly optimistic, with six positive growth comments for every cautious comment, down slightly from November.”

The bigger than expected decrease by the headline index was partly due to a slowdown in the pace of growth in production, with the production index dropping to 59.2 in December from 61.5 in November.

The new orders index also fell to 60.4 in December from 61.5 in November, indicating a modest slowdown in the pace of growth in new orders.

Meanwhile, the employment index crept up to 54.2 in December from 53.3 in November, suggesting a slight acceleration in the pace of job growth in the manufacturing sector.

The report also showed the prices index tumbled to 68.2 in December from 82.4 in November, pointing to a notable slowdown in the pace of price growth.

“While we had already suspected that would cause some renewed disruption to supply chains overseas, the surge in domestic virus cases to more than one million per day could deal a more significant blow to manufacturing output, as significant numbers of workers are forced to stay at home,” Hunter added.

On Thursday, the ISM is scheduled to release a separate report on service sector activity in the month of December. The services PMI is currently expected to decrease to 66.8 in December from 69.1 in November.