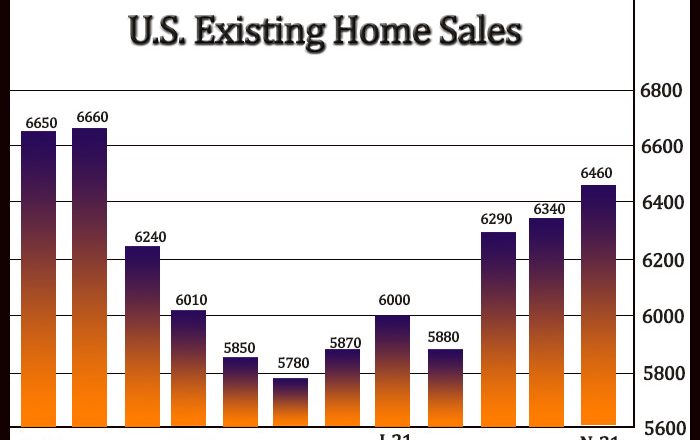 A report released by the National Association of Realtors on Wednesday showed U.S. existing home sales increased for the third straight month in November, reaching their highest annual rate in ten months.

The advance fell short of expectations, however, as economists had expected existing home sales to surge up by 2.8 percent to an annual rate of 6.52 million.

“Determined buyers were able to land housing before mortgage rates rise further in the coming months,” said NAR chief economist Lawrence Yun. “Locking in a constant and firm mortgage payment motivated many consumers who grew weary of escalating rents over the last year.”

He added, “Mortgage rates are projected to jump in 2022, however, I don’t expect the imminent increase to be overly dramatic.”

The report said housing inventory at the end of November totaled 1.11 million units, down 9.8 percent from 1.23 million in October and down 13.3 percent from 1.28 million a year ago.

The unsold inventory represents 2.1 months of supply at the current sales compared to 2.3 months in both October and November of 2020.

“Supply-chain disruptions for building new homes and labor shortages have hindered bringing more inventory to the market,” said Yun. “Therefore, housing prices continue to march higher due to the near record-low supply levels.”

On Thursday, the Commerce Department is scheduled to release a separate report on new homes sales in the month of November. New home sales are expected to spike by 3.4 percent to an annual rate of 770,000.