Home » Business » U.S. Covid cases finally start to dip from latest peak, but Delta variant still on the rise in some states 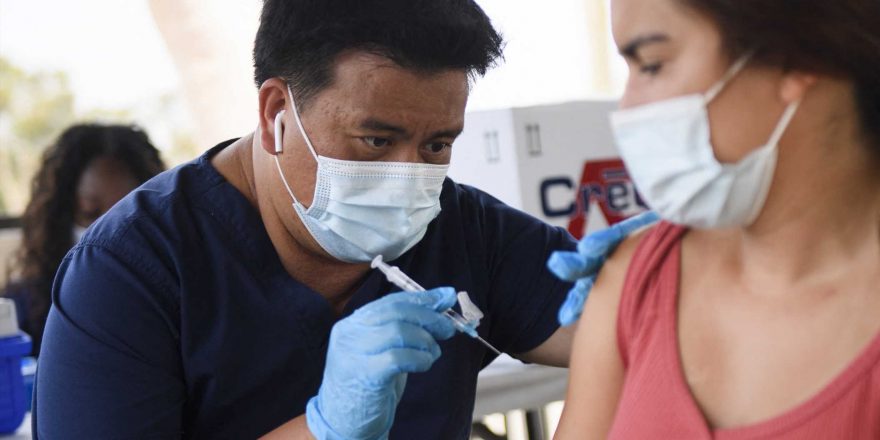 U.S. Covid cases finally start to dip from latest peak, but Delta variant still on the rise in some states

Covid case counts in the U.S. are showing signs of easing off their latest highs but remain elevated as the country heads into a fall season of back-to-school and colder weather.

The seven-day average of daily Covid cases is about 144,300 as of September 12, according to data compiled by Johns Hopkins University. That figure is down 12% over the past week and 14% from the most recent peak in case counts on September 1, when the country was reporting an average of roughly 167,600 cases per day.

"This is good news," said Dr. Arturo Casadevall, the Chair of Molecular Microbiology and Immunology at the Johns Hopkins Bloomberg School of Public Health. "It could represent that we have reached a peak and we are now on the way down."

The U.S. has seen a handful of high points in case counts throughout the course of the pandemic. Average daily cases topped out at about 32,000 in April 2020 before subsiding, and peaked again at 67,000 per day in July 2020. The pace of new cases fell after Labor Day 2020 before surging to a record high of 251,000 cases per day in January. There was a steep drop-off after the holidays, with another jump to about 71,000 cases per day this past April.

"Every epidemic goes through cycles and eventually wanes, and that happens when you have enough people who are resistant," Casadevall said, explaining that the combination of vaccinations and high number of infections this summer could be helping the country turn a corner.

But, he cautioned, the virus has been unpredictable. "I would just be careful declaring anything except some degree of optimism with the fact that the numbers are going down," he added.

There are also some promising signs in Covid hospitalization and death tallies, which tend to lag case counts by a couple weeks or more as it takes time for people to become infected with the virus and then get sick enough to need urgent care.

About 100,600 Americans are currently hospitalized with Covid-19, according to a seven-day average of data from the Department of Health and Human Services, down 2% from a week ago. Though current hospitalizations had not been over 100,000 since January before crossing that level again in late August, the pace of new Covid patients entering the hospital is now on the decline. Centers for Disease Control and Prevention data shows a 6.8% drop in the seven-day average of hospital admissions for the week ending September 10 compared to the week prior.

The daily death toll, though, is still on the rise. The country is reporting an average of more than 1,600 Covid deaths per day over the past week, according to Hopkins data, a six-month high. Daily deaths are up 4% over the past week, however, a more modest increase than the weekly change of 26% reported two weeks ago.

Still, the U.S. is heading into the fall season, with students back in school and colder weather approaching, driving people indoors where the virus spreads more easily.

"I do think it's likely that we hit the peak, but I think the one thing that we need to see before we know that for sure is what the data look like after the entire country has started the school season," said Dr. Bruce Farber, the Chief of Infectious Disease at Northwell Health in New York. With the school year just starting in the Northeast, it could be weeks before any potential classroom-related outbreaks are visible.

The pace of new infections is now falling in some of the states that saw the earliest impact of the delta variant this past summer.

In Missouri, which saw a surge in cases starting in early July, case counts are down 10% over the past week to an average of about 2,100 per day, a 29% drop from the latest peak in early August. Hospital admissions have been falling for weeks and the state's daily death toll is showing signs of flattening. Missouri is reporting an average of 32 daily deaths, according to Hopkins data.

The trends are similar in Arkansas and Louisiana, both of which were at or near the top of the state rankings for population-adjusted case counts over the summer, but now rank 19 and 21, respectively. Arkansas is reporting 1,600 average daily cases compared to its recent high of 2,351 per day on August 7, with Louisiana at 2,239 average daily cases as of September 12, down from a pandemic high of 5,839 on August 13.

Hospital admissions are falling in both states, according to the CDC, though neither state has seen a sustained downturn in daily deaths yet.

Infection levels are down even in Florida, where hospitals have been overrun this summer as the state has endured one of the worst outbreaks in the U.S. Florida, which stopped reporting daily case numbers in May, said it had 100,249 new infections over the seven-day period ending Friday, compared with 129,202 the prior week and 151,760 the week before that. The state reported 2,448 new deaths last week, however, it's highest weekly total of the pandemic.

In other parts of the country, the delta variant is still taking hold.

Case counts in West Virginia hit record levels, according to Hopkins data, reaching a daily average of nearly 1,800 per day. Dr. Clay Marsh, the state's Covid czar and Vice President and Executive Dean for Health Sciences at West Virginia University, said that the most recent surge has been more extreme and has happened more quickly than any of the prior waves.

"We're very concerned about getting out of this particular part of the pandemic because our hospital systems and ICUs have been challenged in a more severe way than we have before," he said.

There are 852 West Virginians in a hospital with Covid-19 as of Monday, Marsh said, up from 52 on July 5. There have also been sharp increases in patients in the intensive care unit, from 17 to 267 over the same time period, and on ventilators, from 6 to 162.

The majority of the Covid patients in critical care in his hospital system are unvaccinated and also younger than in prior stages of the pandemic, Marsh said. While West Virginia was an early national leader in vaccinations, the pace of shots has since dropped off, and the state's 39.9% of the population fully vaccinated is tied for last in the country, Centers for Disease Control and Prevention data shows.

Though Marsh is particularly concerned with protecting the state's under 12 population that is not yet eligible for a shot, he said that 51 out of 55 county school districts, and many of the state's universities, have adopted a mask policy. He hopes that a recent uptick in vaccinations, combined with what is likely a high level of immunity among the population from past infections, will help the state avoid unmanageable pressure on the hospital system.

Some projections show that hospitalizations in West Virginia will continue to rise to new heights in the coming weeks, said Dr. Kathryn Moffett, an infectious disease specialist with WVU Medicine.

"It's staggering," she said. "We're trying to prepare, but I don't know how you can prepare to have more ventilators and more space."

Data shows Covid booster shots are ‘not appropriate’ at this time, U.S. and international scientists conclude

As many return to the office, tensions flare between the ‘vaxxed and unvaxxed’

Kentucky is also setting records. Gov. Andy Beshear said in a statement on September 7 that the state reported a record number of new cases in one week, from Aug. 30 to Sept. 5, with 30,680 cases.

"We continue to see more cases than is safe by any means," Beshear said in the statement. "The bad news is we had the worst week ever last week. Our hospitals continue to be pushed to the brink. If we have one bad week, we can very quickly run out of ICU beds."

And case counts in Tennessee, which is reporting the highest number of average daily new cases per capita over the past week, have been steadily climbing since July. Tennessee reported an average of more than 7,600 cases per day over the past week, according to Hopkins, compared to a pandemic high of 9,627 in December.

Still, infectious disease experts say the country would be in much worse shape without access to Covid vaccines. About 54% of Americans are fully vaccinated, CDC data shows, though the current pace of daily shots is far below record levels from mid-April.

"If we had not had the vaccine, you would have seen much greater cases and much greater mortality," said Casadevall, the Hopkins physician. "It's very clear that people who have the vaccine can get [Covid], but it's also clear that the likelihood that they get severe disease, or that they have to go to the hospital, or that they die, is much lower than if they had not been vaccinated. So the vaccine is quietly in the background saving tens of thousands of lives."