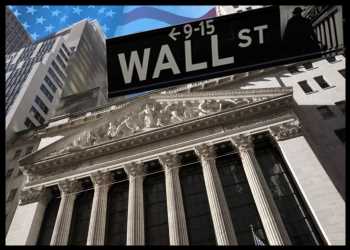 Stocks moved mostly higher during trading on Friday, extending the rally seen over the course of Thursday’s session. With the continued upward move, the Dow and the S&P 500 reached new one-month closing highs.

With the advance seen over the past few sessions, the major averages more than offset the slump seen earlier in the week. For the week, the Nasdaq surged up by 2.2 percent, while the Dow and the S&P 500 jumped by 1.6 percent and 1.8 percent, respectively.

Another batch of upbeat earnings news contributed to the continued strength on Wall Street, with financial giant Goldman Sachs (GS) posting a strong gain after reporting much better than expected third quarter results.

Buying interest was also generated in reaction to a report from the Commerce Department showing an unexpected increase in U.S. retail sales in the month of September.

The report said retail sales climbed by 0.7 percent in September after jumping by an upwardly revised 0.9 percent in August.

The continued sales growth came as a surprise to economists, who had expected retail sales to edge down by 0.2 percent compared to the 0.7 percent increase originally reported for the previous month.

Excluding sales by motor vehicle and parts dealers, retail sales advanced by 0.8 percent in September after spiking by an upwardly revised 2.0 percent in August.

Economists had expected ex-auto sales to rise by 0.5 percent compared to the 1.8 percent jump originally reported for the previous month.

A separate report from the Labor Department showed import prices in the U.S. increased by less than expected in the month of September.

The report also showed export prices inched up by 0.1 percent in September after rising by 0.4 percent in the previous month. Export prices were also expected to increase by 0.6 percent.

Meanwhile, traders largely shrugged off a report from the University of Michigan unexpectedly showing a modest deterioration in U.S. consumer sentiment in the month of October.

The report showed the consumer sentiment index slipped to 71.4 in October from 72.8 in September. The dip surprised economists, who had expected the index to inch up to 73.1.

Oil service stocks showed a strong move to the upside on the day, benefiting from a notable increase by the price of crude oil.

With crude for November delivery jumping $0.97 to $82.28 a barrel, the Philadelphia Oil Service Index surged up by 2.1 percent to a three-month closing high.

Significant strength was also visible among transportation stocks, as reflected by the 1.7 percent gain posted by the Dow Jones Transportation Average. The average reached its best closing level in four months.

Retail stocks also turned in a strong performance on the heels of the upbeat retail sales data, driving the Dow Jones U.S. Retail Index up by 1.6 percent.

Financial stocks also saw notable strength on the day, with the KBW Bank Index and the NYSE Arca Broker/Dealer Index both climbing by 1.4 percent.

The major European markets also moved to the upside on the day. While the German DAX Index advanced by 0.8 percent, the French CAC 40 Index and the U.K.’s FTSE 100 Index climbed by 0.6 percent and 0.4 percent, respectively.

In the bond market, treasuries gave back ground after trending higher over the past few sessions. As a result, the yield on the benchmark ten-year note, which moves opposite of its price, rose 5.7 basis points to 1.576 percent.

Reports on industrial production, housing starts, and existing home sales may also attract attention next week along with the Federal Reserve’s Beige Book.