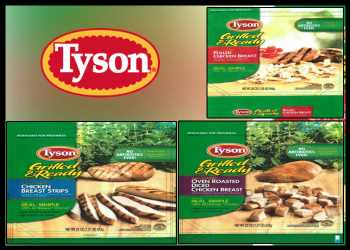 Tyson Foods Inc. is recalling around 8.49 million pounds of ready-to-eat or RTE chicken products that may be adulterated with Listeria monocytogenes, the U.S. Department of Agriculture’s Food Safety and Inspection Service or FSIS announced.

The recall involves frozen, fully cooked chicken products that were produced between December 26, 2020 and April 13, 2021. The products subject to recall bear establishment number “EST. P-7089” on the product bag or inside the USDA mark of inspection.

The affected items were shipped across the United States to retailers and institutions, including hospitals, nursing facilities, restaurants, schools and Department of Defense locations.

The recall was initiated following reports of persons ill with listeriosis.

The FSIS noted that it was notified of two persons ill with listeriosis on June 9, and the agency determined there is evidence linking the Listeria monocytogenes illnesses to precooked chicken produced at Tyson Foods.

The FSIS, working in conjunction with the Centers for Disease Control and Prevention and state public health partners, identified three listeriosis illnesses in its epidemiologic investigation. The listeriosis illnesses, including one death, were reported between April 6, 2021 and June 5, 2021.

The agency said it is continuing to work with federal and state public health partners to find out any additional illnesses linked to these products.

Consumption of food contaminated with L. monocytogenes can cause listeriosis, a serious infection that primarily affects older adults, persons with weakened immune systems, and pregnant women and their newborns.

Healthy individuals may suffer only short-term symptoms such as high fever, severe headache, stiffness, nausea, abdominal pain and diarrhea, while it can cause miscarriages and stillbirths among pregnant women.

The affected products are required to throw away or return to the place of purchase.