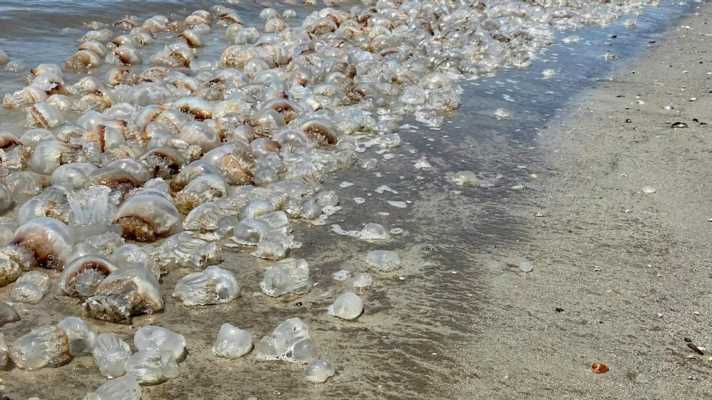 Walking along the beach at Tybee Island in Georgia on Friday after work, Jodi Moody saw a few jellyfish in the surf. Then she rounded the north end of the island. A few turned into “a jamboree of jellyfish.”

Thousands of cannonball jellyfish had washed up, covering an area several yards wide all the way down the beach.

“It was a little intimidating, honestly, because I’ve never seen that,” Moody said Monday. “And I do walk at the beach pretty frequently for years now, and had not seen that.”

She posted her photos to Facebook and garnered hundreds of reactions.

That the jellyfish washed up was not as unusual as the quantity of them, Tybee Island City Manager Shawn Gillen said.

“It happens every year, maybe not as concentrated in one single area as that,” he said.

The noisy ocean: Humans have made the world’s seas a very loud place to live

Cannonball jellyfish can’t swim. Instead, they go where the winds and currents take them. A strong easterly wind on Friday pushed the jellyfish onshore, not only on Tybee, but other Georgia beaches as well, said Tyler Jones, a spokesman for the Georgia Department of Natural Resources.

“It’s just a regular occurrence,” Jones said. “It isn’t like a sign of the apocalypse or anything.”

Cannonballs are the most prominent species of jellyfish in the Southeast, according to Georgia’s DNR website. During the summer and fall, they make up over 16% of biomass on the coastline.

“They primarily eat zooplankton and red drum larvae,” the website says. “When disturbed or threatened, the cannonball jellyfish will secrete a toxic mucus that will harm small fish, and drive away most predators.”

Although they’re generally considered to be non-stinging and no threat to beachgoers, Tybee Island Public Works Director Danny Carpenter advises people to avoid handling them.

Over the weekend hundreds of cannon ball jellyfish washed up on the north end of Tybee Island. (Photo: Richard Burkhart/Savannah Morning News)

“If you’re allergic, the sting (from the mucus) can be significant,” he said.

Sea turtles eat cannonballs and so do some people. In fact, cannonball jellyfish are the second-largest fishery in Georgia by weight, Tyler said. Using shrimp trawlers, fishermen scoop up massive quantities of cannonballs. They’re processed in Darien, then exported, mostly to Asian markets, where dried jellyfish are prized for their texture.

By Monday on Tybee’s north end, the odor of the washed up jellyfish announced their presence as they decomposed. But Tybee does not plan to remove them.

“They wash up on the beach and they get stranded there and become food for the birds and the crabs,” Gillen said. “And then the next tide will wash them out or they’ll get buried in the sand. We just let nature take its course.”