Home » Business » This Is the World’s Largest Warship 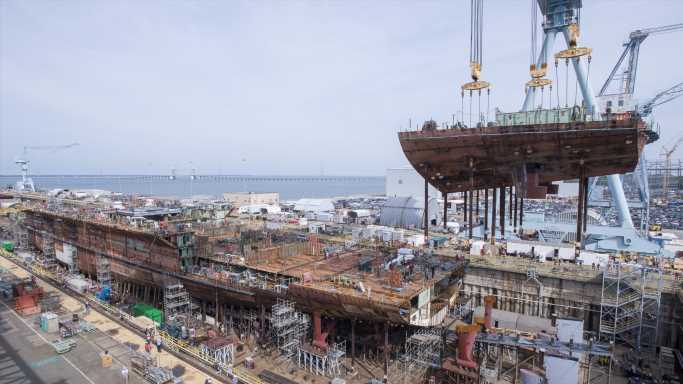 This Is the World’s Largest Warship

The United States has had the largest and most powerful navy in the world since World War II. According to several reports, that is no longer true. China has a large fleet, based on the total number of ships. However, a number of them are extremely small compared to the size of the world’s largest warships. Two classes of American aircraft carriers are approximately the same size. The first of these entered service in 1975. The second entered service in 2017.

The older of the two classes is the Nimitz-class carrier, named after World War II Pacific fleet admiral Chester Nimitz. Starting in 1975, the Navy commissioned ten carriers in this class. They are 1,092 feet long and displace 100,000 long tons. These have a maximum speed of 30 knots, and their engines can produce 260,000 shaft horsepower. Each has a crew of about 6,000. The cost for each carrier was approximately $9 billion.

The Navy has discovered a number of problems with the early Ford-class construction. According to the Congressional Research Service:

In addition to challenges in building, testing, and certifying the ship’s weapon elevators, the Navy reportedly has been working to address problems with other systems on the ship, including its propulsion and electrical systems.

The largest warships behind the two U.S. carrier classes are carriers from China, Russia and France.

Click here to read about the longest wars in history.