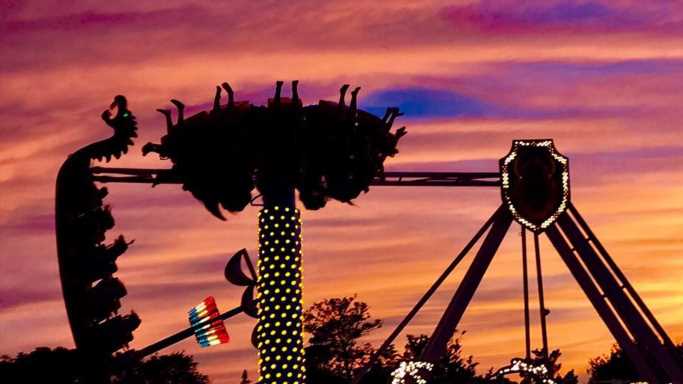 The amusement park business was badly crippled by the COVID-19 pandemic. Likely every park in the United States (and overseas as well) was shut down for an extended period. Disney laid off 32,000 people in late 2020. Some theme park companies faced financial extinction.

As people were allowed to return to theme parks, traffic to them surged. Disney said attendance rose above pre-pandemic levels. In the quarter that ended January 1, theme park revenue rose 34% to $21.82 billion. In fact, attendance has been strong enough for Disney to raise ticket prices.

To identify the American amusement park with the biggest price increase over the past five years, 24/7 Tempo reviewed data on price inflation at major U.S. attractions provided by coupon distribution platform and website DealA. The site compared the current price of a single adult general admission ticket as of December 23, 2021, with the equivalent ticket price in 2017, derived from each museum’s 2017 web pages accessed via the Wayback Machine. If online and in-person ticket prices differed, online prices were used. Automatically applied promotional prices were not considered. When ticket prices differed by day, the starting price of a general admission ticket was used.

Some of the price increases have clearly outstripped the rate of inflation. The top spot on the list is claimed by Funland in Rehoboth Beach, Delaware, where ticket prices have doubled, from $15 to $30, although admittedly starting from a low base.

The second spot is claimed by Santa’s Village in Jefferson, New Hampshire, where prices have risen by 50%, from $32 to $48. Visitors who expect Santa to give rather than to take will be in for a disappointment. In third place is Fun Spot America in Kissimmee, Florida, with a price increase of more than 34%, from $40.95 to $54.95.

See all the amusement parks with the biggest price increases in the past five years.