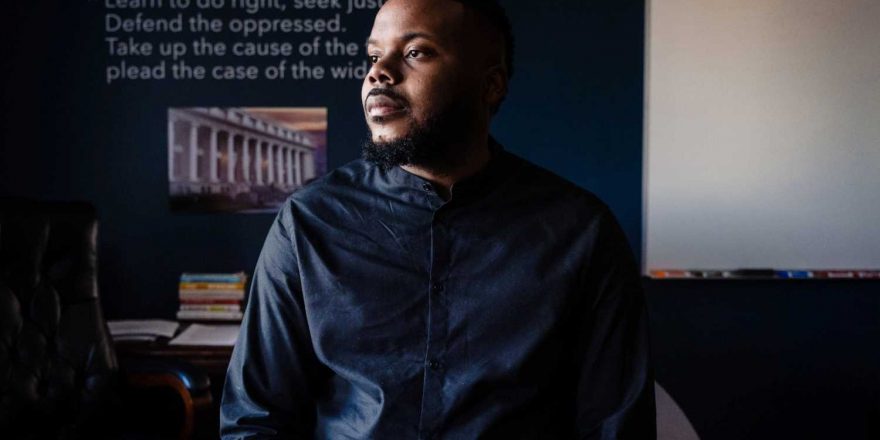 Michael Tubbs had the odds stacked against him while growing up in Stockton, California, as the son of a young single mother and an incarcerated father.

Tubbs, 31, felt the expectations for his life as a Black man in America were either prison or death, he writes in his new memoir, "The Deeper the Roots."

But Tubbs defied that grim future when he was accepted to Stanford University. After graduating, he returned to Stockton to serve as city council member. He upended expectations again when in 2017 he became the city's first Black mayor and, at just 26, the youngest mayor ever of an American city.

More from Personal Finance:
Federal stimulus efforts prompt comparisons to guaranteed income
How one universal basic income experiment is helping the homeless
Just 30% of the poorest families have a savings account

While in office, Tubbs created a guaranteed income experiment that gave certain residents $500 per month, a program that has since been replicated in other American cities. He also worked to help make it possible for other students like him to achieve their college dreams.

In 2020, however, he lost his bid for re-election, a defeat he writes about in his new memoir.

CNBC.com caught up with Tubbs before he kicked off a virtual book tour featuring a Q&A with Oprah Winfrey, with whom he teamed up to publish the book.

Lorie Konish: Your story begins with your mother saying, "Don't tell nobody our business." Why did you decide to write a book telling your story now?

Michael Tubbs: Growing up, so many memoirs really inspired me, particularly memoirs about the transition from adolescence to adulthood. I think of "Black Boy" by Richard Wright. I think of "Makes Me Wanna Holler" by Nathan McCall and others. The unique experiences I had growing up in Stockton, but also being the first Black mayor of a major city, of Stockton, being the youngest mayor of a big city ever, that's just a unique perspective and experience that I felt was worth to capture while it was still fresh in my mind, while I was still living it.

LK: Your father was in jail while you were growing up, which was something you hid. Why?

LK: You talk about how coming up in the educational system, you encountered racism or condescending teachers. You defied expectations when you were accepted to Stanford University. How did that educational experience change your perspective?

MT: From elementary school up until I graduated high school, I just did not get along with a lot of my teachers. And all of them were not racists, but some absolutely were. The classroom didn't feel safe for me. I felt that it was always a struggle or a fight. I felt that my teachers were trying to control me or bring me in line or put me in my place. I just really rejected all of that.

And it wasn't until Stanford where the same things I would get in trouble for in high school, like really kicked out of class for, was the reason why I was a teacher's pet, was the reason all of the professors wanted me to TA for them, was the reason why all of the professors wanted to be my mentor and write recommendations for me. They valued someone who was questioning, someone who was challenging, someone who was really excited about learning and wanted to debate ideas and discuss. That was the biggest surprise of Stanford, actually, was I didn't get controlled in class, that I was the teacher's pet. It was the exact opposite in high school or elementary school.

LK: As an intern in President Barack Obama's White House, you found out that your cousin Donnell had been shot and killed in Stockton. What was that like, and how does Donnell's death influence you today?

MT: That was very jarring. Just dealing with the pain, the anger, the grief, the feeling of helplessness, almost feeling nihilistic, and also doing so from a place of privilege, like being in the White House, and being at Stanford and having been at Google before that. And really thinking about how was anybody's lives better because these things were happening for me? Or how is this helping anyone else? It really caused me to think, OK, what do I want to do in the world?

And that pain and that anger and that grief drove me to run for city council and it still drives the work I did and do now around gun violence reduction and creating safer communities and reducing homicides in communities like Stockton. It was so real and so visceral, and then realizing that the No. 1 cause of death in this country for young Black and Latino men between 14 and 25 isn't cancer, isn't Covid, it's gun violence. It's unacceptable, and I felt like I had to do something to try to change it.

LK: When running for city council, you had serendipitous run-ins with people like Oprah Winfrey and MC Hammer, who helped you financially. What was that like?

No one plans to run for office and have MC Hammer give them money for a city council race. It just reminded me that this was something bigger. It was bigger than me and bigger than this race. And it came at pivotal inflection points when I wanted to give up, when I felt like I didn't have enough. I'm still in shock, amazed, surprised to this day, like 10 years later.

LK: Have you kept in touch with them?

MT: MC Hammer lives like 30 minutes away from Stockton. So we've had a couple dinners, we text, we did a Clubhouse conversation recently about basic income. I call him Uncle Hammer now.

Oprah, we hadn't kept in touch until she picked up the book and said, "I want to publish it." And we're having a conversation about the book, which I'm excited about.

LK: You write about how happy your mother was on the last day she used a local check-cashing service. How did those services influence your family and the Stockton community?

MT: In some parts of Stockton, you're going to find check-cashing places. Given the way paychecks work, you get paid the 15th and the 31st, but your bills are due the 12th or the 10th. To see my mom having to go to check-cashing places, not because she would never have the money, but because she didn't have the exact amount the day it was due, and would need like two more days to wait for her pay check. That really gave me a passion for economic security and that's where basic income comes from, and that's where a lot of the work around financial inclusion comes from, is seeing how predatory and how terrible these institutions are in that they keep people in the cycle of debt and keep a rat race that's very hard to pull out of.

LK: Did that contribute to the idea for the guaranteed income experiment?

MT: My belief in basic income came from thinking how would my mom use that money, how would that help my mom raise me and my brother.

LK: What lessons have you learned about guaranteed income now?

MT: That dignity has to be attached to humanity before it's attached to work. What you dignify is inherent to who we are as people. That's a big lesson. There's this idea of time. Money is proxy for power and agency. And so the ability to own your time and decide what you want to do and how you want to do it is important. And that you can trust people. You can trust them to make decisions for themselves and their family.

LK: A big part of your efforts in the community have also been with education. Why has that been such an emphasis for you?

MT: It also comes from personal experience. I've seen how four years getting a master's and bachelor's at Stanford has really set me up to be doing the work I'm doing now. It opened up my horizons, opened up my mind, I met my wife. It also taught me critical thinking. It taught me how to challenge. It gave me a network of people of support to draw from. And it's empowered me to go back to my community. And to think about the potential of education and critical thinking to really create the changes we need to see in our local communities, in our state and in our nation.

LK: What would you like your legacy of your time as Stockton's mayor to be?

MT: I want my legacy as Stockton's mayor to be a mayor who wasn't afraid of hard things, who believed that the city belonged to all people and who changed Stockton's perception from a city with problems to a city where there's solutions.

LK: Now you're planning to launch an anti-poverty project?

MT: It's an anti-poverty initiative called End Poverty in California, and it's really about really sort of using all the tools at our disposal, from media to policy to art to research to piloting to really elevate the issue of poverty as a top issue for Californians to solve and really muster the political will to solve it. In January, we're rolling out with a policy paper, because I'm a policy nerd, and then we have some other stuff in the works.

MT: California is the Golden State. It has so much wealth, so much opportunity, but it also has the highest poverty rate in the country. It just seems antithetical to our values as a state. And as California goes, so goes the nation. It's hard, as we've seen, to move things on a national level. As a state, we can organize and actually get things done.

LK: How did this idea come about?

MT: I've always been obsessed with ending poverty, and that's kind of where some of the guaranteed income work comes as well. When I lost the election, it was like what do you want to do? I still want to work on this issue. This issue is still that important. It's worth losing for. It's worth trying again for.

LK: What are the moments that have offered you the most satisfaction?

MT: The fact that we have 60 mayors signed up to be part of Mayors for a Guaranteed Income. When I started, it was just me. There was one mayor for guaranteed income in this country, and now there's 60. I am incredibly proud of all of the kids who are in the Stockton Scholars program, who are getting scholarships for four years or two years or trade school, who speak so beautifully about their community and ways to come back and ways to serve and continue the work that was started. My two kids, they get up every day and are hopeful, excited, laughing and growing. All of those give me hope.