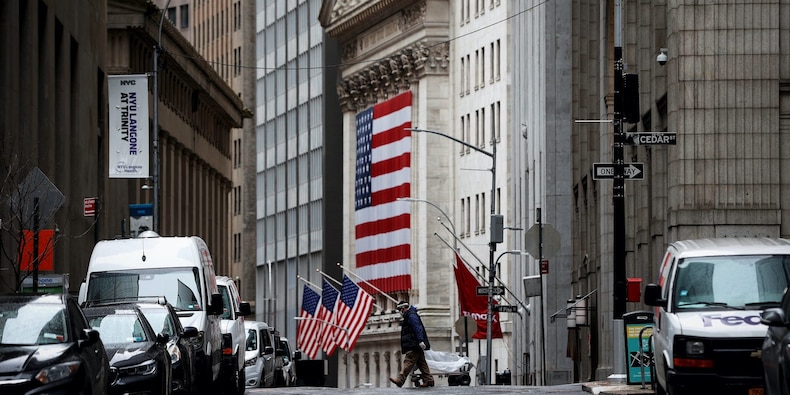 Since 1973, sectors that led the market over an entire decade had just an 8% chance of repeating that performance over the next decade, according to the bank. Such sectors also had a 25% chance of becoming one of the two worst-performing groups over the next 10 years. If the trend holds up this year, it may be time for investors to ditch tech and consumer discretionary stocks and look for a new market front runner, the world’s largest wealth manager said.

Here are the four subsectors Haefele pointed to as possible market leaders over the next decade.

Read more: Cannabis stocks soared after Biden’s win. Morningstar’s chief US market strategist told us the 2 names that are still the most undervalued – and says the industry is well-positioned for gains in the years to come.

The launch of the first 5G-capable iPhones ushered in a new phase of expansion for the new communication technology. More people will have access to 5G than ever before, and various kinds of businesses can leverage faster connections to transform over the next decade, Haefele said.

Enablers of the 5G rollout will be the first to benefit, according to UBS. Companies that build and install 5G towers will enjoy a 1900% jump in 5G capital spending over the next five years. Smartphone manufacturers will also thrive.

Once 5G becomes the new standard, firms that can build novel use cases present alluring investment opportunities, Haefele said. Autonomous driving, augmented and virtual reality, telesurgery, and artificial intelligence applications are just some of the industries likely to expand in a 5G-enabled economy, he added.

Changing how we pay

The coronavirus pandemic accelerated a shift to online payments and e-commerce, but growth will likely continue well after the virus is contained, according to the bank. UBS expects financial technology firms to post earnings growth in the “mid-to-high teens” through 2030 and become one of the fastest-growing industries around the world.

“Once consumers have grown accustomed to using primarily digital payments, many will not revert to traditional means,” Haefele said, adding growth in digital payments will land in the “low teens” over the next decade.

Looking beyond the medium term, fintech companies will expand into new services including online lending, investing, and insurance-tech, UBS said. These businesses offer higher margins and stronger growth. Implementation of blockchain and AI technology can make such services far easier to scale, the bank added.

Read more: A 28-year-old hedge fund co-investing chief shares how he advanced from community college to Wall Street – and breaks down his two-pronged approach to managing the fund’s volatility strategies

Once the healthcare industry normalizes from the pandemic, technology will play a critical role in boosting efficiency, lowering costs, and improving quality, UBS said. The US already spends nearly $8 trillion on healthcare, but up to 25% of spending was wasted last year on failed coordination, pricing, delivery, and overly complicated treatments.

Telemedicine, new treatment technologies, and advanced diagnostics capabilities are the three main areas set to grow considerably over the next decade, according to the bank. Gene editing, genetic therapies, and regenerative medicine can improve patient outcomes, while artificial intelligence and new sensor technologies can allow for faster and more accurate diagnoses.

UBS expects the US telemedicine market to expand to more than $30 billion by 2025 from less than $20 billion today. China’s market will quintuple to more than $50 billion, the firm added.

Governments are taking bigger steps to cut carbon emissions. The EU and Japan plan to go carbon neutral by 2050, and China aims to do the same 10 years later. These goals will boost “greentech” as the world’s largest industries look to benefit from government investment and subsidies, Haefele said.

Countries will push the transition by swapping fossil-fueled power generation with renewable energy, replacing traditional vehicles with electric counterparts, using hydrogen in place of gas in industrial applications, and finding digital solutions for boosting efficiencies, according to UBS. Accordingly, the renewable energy, hydrogen, and battery industries are those best positioned to benefit.

The S&P 500 will rally 12% through 2021 as investors position for a virus-free economy, Credit Suisse says

The managers of Rathbones’ $2.4 billion ethical bond fund are beating their benchmark – and 95% of their peers. Here’s their tips for making a success of green investing