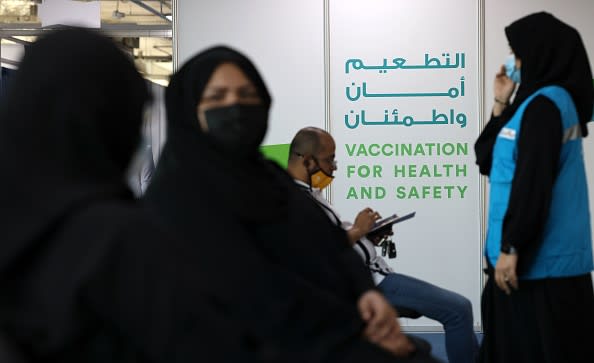 "An additional supportive dose of Sinopharm is now available to people who have received the vaccine previously and who have now completed more than six months since the second dose," the UAE's National Emergency Crisis and Disaster Management Authority tweeted Tuesday evening.

Bahrain's National Medical Taskforce for Combatting the Coronavirus simultaneously announced "the opening of registration for a booster COVID-19 vaccine dose for the most vulnerable groups in Bahrain, at least 6 months after taking the second dose of the Sinopharm vaccine, for first responders, as well as citizens and residents above the age of 50, as well as those suffering from obesity, low immunity, or other underlying health conditions."

The announcements come amid questions over Sinopharm's efficacy and reports of Covid-19 reinfections among people who have received their two doses of the shot.

The World Health Organization earlier in May approved Sinopharm for emergency use, making it the first non-Western vaccine to get the organization's green light. Developed by China's state-owned China National Pharmaceutical Group (commonly referred to as Sinopharm) it is one of the country's two main shots that have been administered to millions of people in China and elsewhere, particularly in the developing world.

The UAE's vaccination campaign, one of the fastest in the world, has relied heavily on the Sinopharm shot, available to all residents and citizens since late 2020. The Pfizer/BioNTech, AstraZeneca/University of Oxford and Sputnik V vaccines have also been available in Dubai for several months, while UAE capital Abu Dhabi only offered its residents Sinopharm until it recently changed course to offer Pfizer as well in late April.

The UAE government announced in December of last year that an "interim analysis" conducted by the China National Biotec Group (a subsidiary of Sinopharm) of the vaccine's phase 3 trials in Abu Dhabi found it to be 86% effective. But the announcement was thin on details and did not disclose how that 86% figure was calculated.

In the same month, China announced the vaccine as 79.34% effective based on what it said was "interim trial data" without releasing phase 3 results, conflicting with the UAE's figures.

In a national case that's raised more concerns, the Seychelles — the most highly-vaccinated country in the world, with roughly 60% of those vaccinated having received Sinopharm — is seeing a new surge of Covid cases among vaccinated residents. Its health ministry in mid-May reported that more than a third of people who tested positive for Covid-19 in the week to May 8 had been fully vaccinated. The World Health Organization has said it will review coronavirus data from the island nation.

Sinopharm has not replied to multiple CNBC requests for comment.

The UAE is set to play a significant role in expanding vaccine access across the developing world thanks to its partnership with China to locally manufacture millions of doses as part of a joint venture between Sinopharm and UAE-based tech company G42. The UAE-produced vaccine is called Hayat-Vax; hayat means "life" in Arabic.

In March, the UAE gave third doses of Sinopharm to "a small number" of people who failed to develop antibodies after their first two shots, local news reported.

The UAE's coronavirus cases hit a peak of some 4,000 per day in late January, but have since fallen to fewer than 1,500 per day. After a very strict spring lockdown in 2020, the Gulf sheikhdom's economy has fully reopened, with its commercial capital Dubai becoming one of the first places in the world to resume tourism and in-person conferences.

Despite this, it's been on a travel "red list" for the U.K., a top tourism partner, since January. France and a number of other European Union countries have also put the UAE on their red lists, requiring ten-day quarantines on arrival.

In late April, the UAE announced it would consider "strict measures" to limit the movement of people unvaccinated against the coronavirus, seeking to further ramp up its national inoculation campaign that has already administered nearly 11.5 million shots in its population of roughly 10 million.