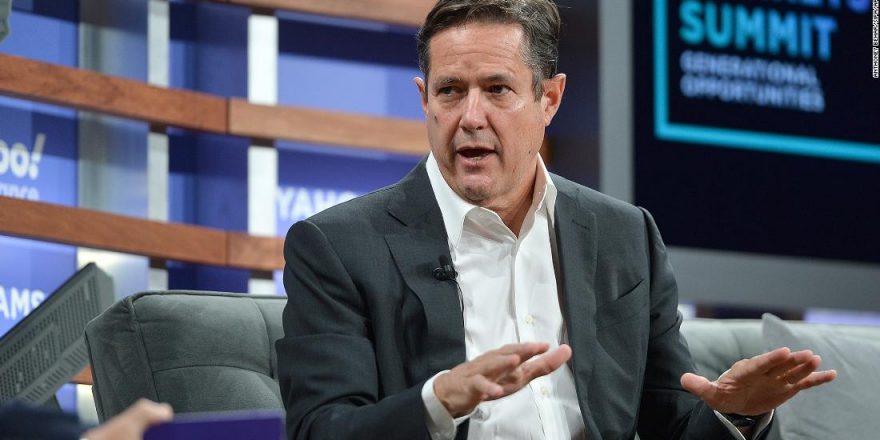 The life of Jeffrey Epstein

London (CNN Business)The American chief executive of Barclays (BCS), Jes Staley, is being investigated by British regulators in connection with his relationship with disgraced financier Jeffrey Epstein, the bank said on Thursday.

“The relationship between Mr Staley and Mr Epstein was the subject of an enquiry from the Financial Conduct Authority to which the company responded,” Barclays said in a statement.
According to the bank, the FCA subsequently launched an investigation into how Staley had characterized the relationship to Barclays, and how the bank then described it to regulators. The focus of the ongoing investigation is whether that relationship was properly disclosed.

The FCA and another regulator, the Bank of England’s Prudential Regulation Authority, confirmed in a statement that they are investigating the Barclays CEO. They gave no further detail.

Shares in the bank fell as much as 3.8% on Thursday, before paring losses to trade about 2.5% weaker.

Staley has been running Barclays since late 2015. Prior to that he worked for more than 30 years at JPMorgan (JPM), where he served as head of its investment banking division. JPMorgan declined to comment.
In its statement, Barclays said Staley had developed a professional relationship earlier in his career with Epstein, who died by suicide in jail last year while awaiting trial on sex trafficking charges. The bank said Staley had told the board that he had no contact with Epstein since becoming Barclays CEO in December 2015.
Staley acknowledged in a call with reporters on Thursday that he had a “professional relationship” with Epstein going back to 2000, when he became head of JPMorgan’s private bank. “He was already a client. The relationship was maintained during my time at JPMorgan, but as I left Morgan it tapered off quite significantly,” Staley said.
Staley left JPMorgan in 2013 and became a managing partner at Blue Mountain Capital, a hedge fund, before joining Barclays towards the end of 2015.
Asked whether he regretted his relationship with Epstein, Staley said: “Obviously I thought I knew him well and I didn’t. And for sure with hindsight of what we all know now I deeply regret having had any relationship with Jeffrey Epstein.”
Barclays said it had carried out its own review, with the support of external counsel, and had concluded that Staley had been “sufficiently transparent with the company as regards the nature and extent of his relationship with Mr Epstein.”
“Mr Staley retains the full confidence of the board, and is being unanimously recommended for re-election at the annual general meeting,” it added.

This is Staley’s second run in with regulators in recent years.
In 2018, the Financial Conduct Authority fined him about $870,000 after it emerged that he had tried to identify a whistleblower at the bank. Staley had attempted to find out who had authored an anonymous letter that raised concerns about a senior Barclays employee.
He apologized for his behavior and admitted that he had “made a mistake.” Barclays clawed back about $680,000 of his 2016 pay over the incident.
A Wall Street veteran, Staley has remained committed to growing investment banking at Barclays, even as European peers scale back in this area in favor of wealth management.
But some shareholders have criticized his bid to compete with the likes of Goldman Sachs (GS), Morgan Stanley (MSPRA) and his former employer, which has delivered disappointing returns. Barclays stock is down about 22% since he took over.
Staley will face scrutiny from investors at the annual general meeting on May 7 over a range of issues, including the bank’s approach to the climate crisis.
More than 100 of its shareholders have filed a resolution calling on Barclays to bring its financing activities in line with the goals of the Paris Agreement, and publish details of how it plans to stop lending to fossil fuel companies.

Staley is not the first high profile individual to face scrutiny over his relationship with Epstein.
Britain’s Prince Andrew stepped back from public life, and his charities have been shunned by businesses, since details of his close association with the late financier emerged. One of Epstein’s accusers, Virginia Roberts Giuffre, has alleged in court filings that she was forced into sexual encounters with the prince while underage. Prince Andrew has denied the allegations.
Epstein began his Wall Street career at Bear Stearns before starting his own investment firm. He was friendly with some of the richest and most powerful people in the world, including Leslie Wexner, founder of Victoria’s Secret parent, L Brands (LB). Wexner has said he cut ties with Epstein in 2007.

At the time of his death, Epstein was awaiting trial on federal charges accusing him of sexually abusing underage girls and running a sex trafficking ring. The 66-year-old had pleaded not guilty to the charges.
— Julia Horowitz contributed to this article.
Source: Read Full Article