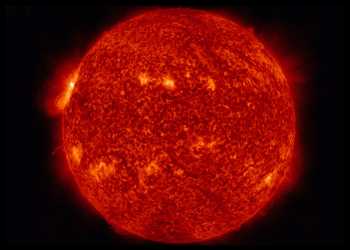 NASA’s Solar Dynamics Observatory, which watches the Sun constantly, captured an image of the rare event that peaked at 11:34 p.m. ET, Saturday.

However, there are no specific reports of such hazardous incidents taking place so far.

This flare is classified as an X-Class flare, which denotes the most intense category.

Solar flares are large eruptions of electromagnetic radiation from the Sun lasting from minutes to hours. The sudden outburst of electromagnetic energy travels at the speed of light, therefore, any effect upon the sunlit side of Earth’s exposed outer atmosphere occurs at the same time the event is observed.

The increased level of X-ray and extreme ultraviolet (EUV) radiation results in ionization in the lower layers of the ionosphere on the sunlit side of Earth.

Under normal conditions, high frequency (HF) radio waves are able to support communication over long distances by refraction via the upper layers of the ionosphere.

When a strong enough solar flare occurs, ionization is produced in the lower, more dense layers of the ionosphere, known as the D-layer. Radio waves that interact with electrons in layers lose energy due to the more frequent collisions that occur in the higher density environment of the D-layer. This can cause HF radio signals to become degraded or completely absorbed. This results in a radio blackout – the absence of HF communication, primarily impacting the 3 to 30 MHz band.

Solar flares usually take place in active regions, which are areas on the Sun marked by the presence of strong magnetic fields.

NASA observes the Sun and the space environment constantly with a fleet of spacecraft that study everything from the Sun’s activity to the solar atmosphere, and to the particles and magnetic fields in the space surrounding Earth.