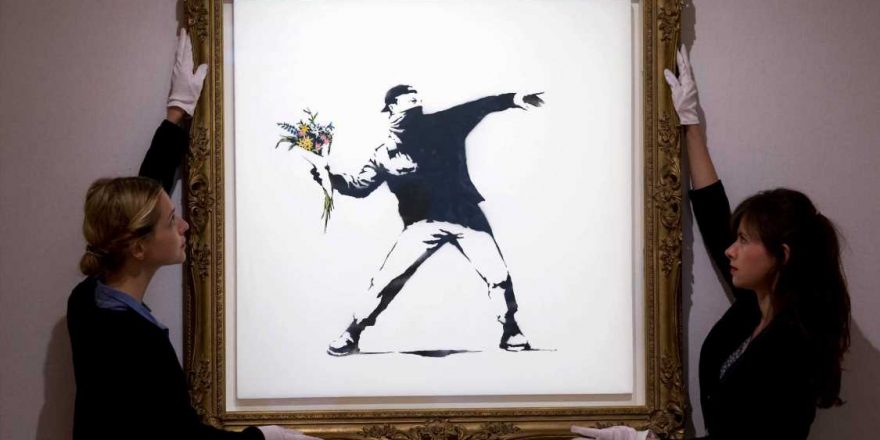 Sotheby's announced Tuesday it will accept bitcoin and ether in an upcoming auction of Banksy's "Love is in The Air."

It represents the first time a major auction house will accept the two cryptocurrencies as payment for a physical piece of art, according to Sotheby's. The winning bidder can also pay in U.S. dollars.

Sotheby's latest entrance into the world of digital assets is being done through a partnership with the cryptocurrency exchange Coinbase, which went public in April. Sotheby's first jaunt came last month, when the auction house sold nonfungible tokens, or NFTs, created by the digital artist Pak.

Banksy's "Love is in The Air" is one of the best-known works from the British street artist, whose real name is not known. The auction is set for May 12. Stewart said bidding is estimated between $3 million to $5 million.

"It may well be that the winner of this painting pays in dollars and not crypto, but I think for us, creating the possibility for this is interesting," Stewart said. "There's clearly a large audience interested in the NFT aesthetic and possibility there. Why wouldn't that extend to the physical art world, as well? It will be very interesting to see."

In its three-day sale of Pak's NFTs, Stewart said Sotheby's saw over 3,000 buyers. The collection, in total, sold for $16.8 million in U.S. dolloar "We are definitely seeing a large — and largely new — audience from a Sotheby's perspective," Stewart said.

In March, Christie's became the first major auction house to sell an NFT,  which are blockchain-based assets that are unique by design. The work from digital artist Beeple sold for nearly $70 million. Christie's accepted ether as payment for that Beeple auction.

If the winning bidder pays for the Bansky painting with in either bitcoin or ether, CNBC's Andrew Ross Sorkin asked whether Sotheby's plans to hold the cryptocurrency or immediately convert it into U.S. dollars.

"We have an agreement with the owner of the painting, the consigner of the painting, so that will ultimately be up to them," Stewart responded. "Part of the partnership with Coinbase gives us not only the ability to process the payment, but that possibility as well."

The announcement Tuesday from Sotheby's, which was founded in 1744, represents further institutional adoption for cryptocurrencies.

Mastercard earlier this year said it would begin to provide support for certain cryptocurrencies on its network, while major Wall Street banks Morgan Stanley and Goldman Sachs have taken steps to offer their respective wealth management clients exposure to bitcoin.

Other companies, such as Tesla and Square, have bought bitcoin to hold on their balance sheets. Tesla also began to accept bitcoin as payment for its electric vehicles.

Using bitcoin to make purchases carries noteworthy tax implications because of its classification with the Internal Revenue Service.

The IRS considers bitcoin property, so spending bitcoin is viewed essentially the same as selling it. That means an individual who pays for an item or service in bitcoin could potentially owe capital gains taxes at the point of ownership transfer if the value of bitcoin is higher than when they initially acquired it.

Bitcoin traded just below $56,000 per token Tuesday, putting its year-to-date gains at more than 90%, according to Coindesk. Ether traded just under $3,500 Tuesday, slightly below the all-time high it reached earlier in the day. Ether has rallied more than 360% so far in 2021.