Home » Business » Sivakasi, home of fireworks, is losing its spark 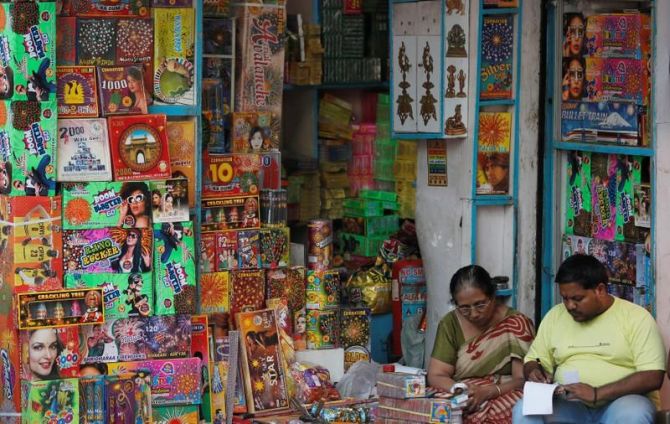 Sivakasi, home of fireworks, is losing its spark

It’s not just the pandemic that has shr­unk every Indian festival to a shadow of its exuberant self. Pollution also has been a factor. Enter the fireworks city of Sivakasi in Tamil Nadu and you can smell a familiar mix of sulphur, potassium nitrate, aluminium and carbon — familiar because if you’ve ever burst crackers, say on Diwali or Onam, chances are they were made here.

Almost every household used to contribute to India’s festive joy by contributing almost 90 per cent of the fireworks made in the country.

Before the pandemic, around 300,000 people worked in the industry directly and another 500,000 indirectly.

Located 540 kilometres from Chennai, Sivakasi is famous for its fireworks and crackers, along with printing and matches, but is almost a ghost town these days.

“At least 200 fireworks units have closed down in the last one year. Those units that are still open are working at a capacity of only 20-30 per cent,” said Balaji T K of Sree Balaji Fireworks.

There are currently 1,070 manufacturing units in and around Sivakasi, according to data from the Tamil Nadu Fireworks Amorces Manufacturers’ Association (Tanfama).

It’s not just the pandemic that has shr­unk every Indian festival to a shadow of its exuberant self. Pollution also has been a factor.

The National Green Tribunal (NGT) has banned the sale and use of firecrackers in places with a poor air quality index (AQI) during the pandemic.

In a small work space, 45-year-old Mareeswari (who identifies only her first name) sits with two other workers wrapping gunpowder with paper.

Each unit is separated by a distance of at least 12-15 metres to follow the safety norms.

The festive season is nearing and for Mareeswari and lakhs of her colleagues, it is going to be a make-or-break year.

P Ganesan, director of Sony Fireworks and president of Tanfama, is dismayed at the slump.

“The size of the industry came down by 30 per cent last year and again another 20 per cent this year.

“We are expecting sales of only around 50 per cent or around Rs 1,500 crore this year.

“That too, only if the government allows sales in 120-odd cities,” said Ganesan.

Estimates by another manufacturers’ body, the Indian Fireworks’ Manufacturers’ Association, suggest that 122 cities contribute to around Rs 400-500 crore annual sales from Sivakasi.

Workers here were already struggling due to lockdowns and a resulting drop in production.

As units shut, jobs were lost. Now they are waiting to see if festivals are going to be curtailed or reduced in some way.

Their jobs hinge on full-blooded celebrations.

“We need jobs. I have been doing this for several years and now the factories are also working in minimal capacities.

“We are worried that if there are no sales, jobs will vanish,” said Muthulakshmi, a daily wager.

One corollary of the slump in the fireworks industry is that printing units are also shutting down owing to the dip in demand for paper used for packaging.

This is endangering Sivakasi’s second claim to fame — a high number of printing presses.

Hopes of a normal Diwali are fading.

The Supreme Court has rejected appeals challenging the ban on fireworks in places with poor AQI.

“Our orders are not even half of what they were before the pandemic. Just look, even at such high discounts, there are no takers,” he said.

According to manufacturers, aluminium prices have increased by 30 per cent; paper and paper products by 40-60 per cent; and sulphur by 100 per cent.

“Our average raw material price has increased by 40-50 per cent.

“This has increased our manufacturing cost by 45 per cent.

“Despite this, we are forced to sell at a discounted price of 40 per cent less than the pre-pandemic level,” said Balaji.

Gunasekharan, 60, manager of Sony Fireworks’ manufacturing unit, has dep­en­ded on the industry for his livelihood for 40 years.

“We are making only green crackers now. Prices of raw materials have inc­reased multifold and we are only able to dispatch around 30 per cent of what it was prior to Covid, despite all the 200-odd workers in our unit taking vaccination,” he said.

Producers, workers and retailers are now seeking intervention from the Centre and the state.

They have taken legal action to get the NGT ban lifted so that they can re-open the units.

Their hopes are trained on Diwali.

Many in the city already believe that the name Jawaharlal Nehru bestowed on Sivakasi — “Kutty Japan” or Little Japan because he greatly admired Japan’s vibrant industrial culture and Sivakasi was a symbol of success in the 1960s when it was booming — will end up being a misnomer.

“Onam and Ganesh Chaturthi markets have gone and they were a washout. If there is no Diwali too, the Sivakasi story will be over,” said Ganesan.