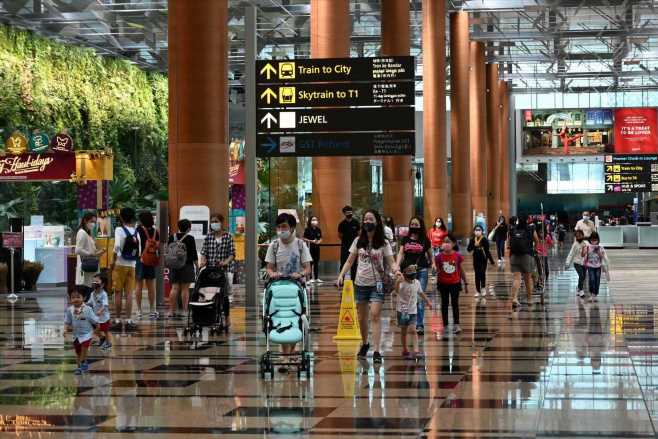 Searches for cities within Singapore's so-called VTLs doubled — and in some cases almost tripled, according to Expedia Group data. It came after government officials announced the opening of new quarantine-free travel lanes to countries in Europe, North America and Asia.

Last week, Singapore announced quarantine-free travel with Canada, Denmark, France, Italy, Netherlands, Spain, the U.K. and the U.S. starting Oct. 19 — as well as South Korea from Nov. 15. Among the conditions are that travelers must be vaccinated and must take Covid-19 tests to ensure they are not infected before entry into the country.

The announcement marked a substantial expansion to the island nation's VTL program, which currently includes Germany and Brunei.

Expedia's managing director for Asia said the searches mark a shift in consumer demand for international travel. In August, Singapore's most searched cities were regional hotspots, such as Japan, Hong Kong, Maldives and Taiwan.

"The VTLs have definitely had an impact in terms of how people think about travel, where they're looking to travel, and how they plan their travel," Choo Pin Ang told CNBC's "Capital Connection" Tuesday.

However, he added that he expects more traditional travel destinations to increase in popularity as further easing is announced. Already, Singapore-based searches for year-end travel to both VTL and non-VTL destinations tripled from June to October.

That spells good news for the battered travel industry. As of Wednesday, Singapore Airlines' share price was up more than 9% on the week while shares of SATS — which provides ground and in-flight catering services at Singapore Changi Airport — increased around 5%.

"Happy days are here again," Amit Saberwal, founder and CEO of Southeast Asian budget hotel chain RedDoorz, told CNBC Wednesday. "Even though they are early days, I don't think we're going to go back towards regressive lockdown and people not being able to travel… I think it's our moment to shine again."

More quarantine-free travel lanes, including some in Asia-Pacific, are expected in the coming months, according to Singapore officials.

Australia, New Zealand and Japan are likely to be included, as well as some "closer to home" countries in Southeast Asia, said Ang.

Thailand on Monday announced plans to lift quarantine restrictions for vaccinated travelers from low-risk countries, including Singapore, from November.

"What will really determine whether VTLs can work is the strong economic ties between Singapore and these countries, vaccination rates, and how much headway the countries have made in mitigating Covid," he said.

— Shubhangi Goel contributed to this report.