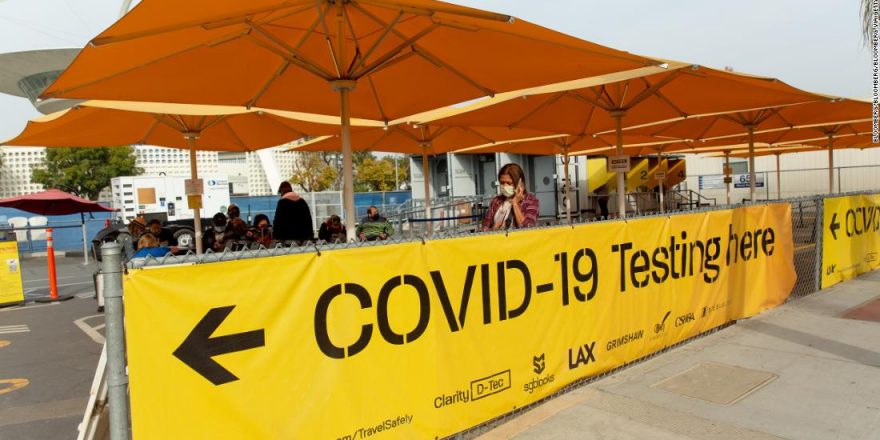 See doctor's warning about possibly having to let patients die

(CNN)About 24% of US hospitals are reporting a “critical staffing shortage,” according to data from the US Department of Health and Human Services, as public health experts warn the Covid-19 surge fueled by the Omicron variant threatens the nation’s health care system.

“Given how much infection there is, our hospitals really are at the brink right now,” Dr. Ashish Jha, dean of Brown University’s School of Public Health, told CNN on Sunday. 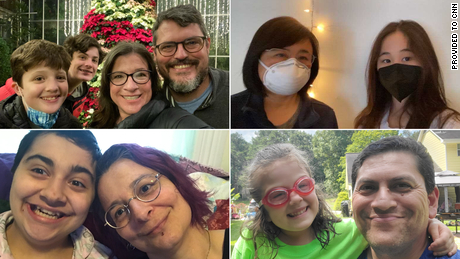 Of the approximately 5,000 hospitals that reported this data to HHS on Saturday, nearly 1,200 — about 1 in 4 — said they are currently experiencing a critical staffing shortage, the largest share of the entire pandemic. More than 100 other hospitals said they anticipate a shortage within the next week.

The US health care system is Jha’s greatest concern, he said, noting the Omicron surge could hamper its capacity to care for patients suffering from conditions other than Covid-19.

“And all of that is going to be much, much more difficult because we have a large proportion of the population that is not vaccinated, plenty of high risk people who are not boosted,” he said. “That combination sets up a large pool of people who as they get infected will end up really straining the resources we have in the hospitals today.”
These staff shortages are growing as frontline health care workers are either infected or forced to quarantine due to exposure to Covid-19 just as the demand for treatment skyrockets: More than 138,000 Covid-19 patients were in US hospitals as of Saturday, according to the Department of Health and Human Services. That’s not far from the all-time peak (about 142,200 in mid-January 2021) and an increase from around 45,000 in early November.
To safeguard hospital capacity, some facilities are forced to cut elective surgeries. In New York, for example, 40 hospitals — mainly in the Mohawk Valley, Finger Lakes and central regions — have been told to stop nonessential elective operations for at least two weeks because of low patient bed capacity, the state health department said Saturday. 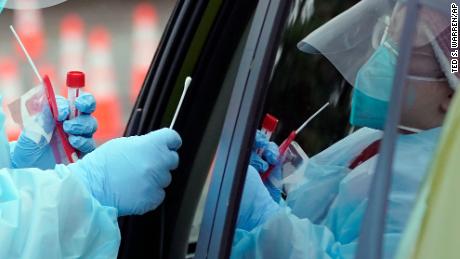 The University of Kansas Health System is also close to implementing crisis standards of care, Chief Medical Officer Dr. Steven Stites said Saturday, telling CNN, “At some point … we’re too overwhelmed to do any of our normal daily work.”
“At that point we have to turn on a switch that says we got to triage the people we can help the most,” he said, “and that means we’ve have to let some people die who we might have been able to help but we weren’t sure about — they were too far gone or had too much of an injury, or maybe we can’t get to that trauma that just came in.”
Stites said two waves were hitting Kansas simultaneously — with Delta accelerating post-Thanksgiving, to be met by Omicron — describing it as “almost a double pandemic.” The vast majority of those being hospitalized are unvaccinated, Stites said.
Dr. Jonathan Reiner, professor of medicine and surgery at George Washington University, told CNN on Saturday the next several weeks will “look bad in many American cities.”
“Forty hospitals in New York just canceled elective procedures. The DC Hospital Association, where I work, has asked the DC government for permission for hospitals to enact crisis standards of care,” he said. “And that’s coming to every city in the United States.” 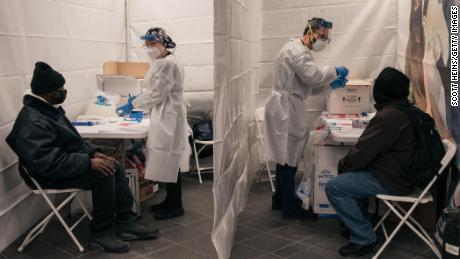 About 62.5% of the total US population — 208 million people — is fully vaccinated, according to the US Centers for Disease Control and Prevention. About 75.4 million people have received a booster dose, meaning 23% of the total US population is fully vaccinated and boosted.
But still about 21% of the eligible population, or 65.5 million people 5 and older, have not received a single dose of a Covid-19 vaccine, the CDC data show.
Nationwide, 39 states are reporting a 50% or greater increase in cases during the past week compared to the previous week, according to a CNN analysis of data from Johns Hopkins University. As of Saturday, the seven-day average of new daily cases in the US was 701,199, per JHU data.
Two healthcare providers told CNN they’d been forced to prioritize Covid-19 testing for certain people due to a spike in demand. 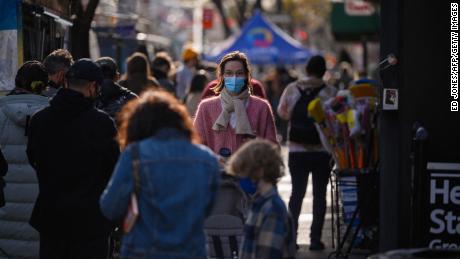 Last week, multiple UW Medicine locations in Washington started prioritizing testing solely for people “who have symptoms of respiratory illness or who have a known exposure to COVID-19,” spokesperson Susan Gregg told CNN. People without symptoms are not being tested, Gregg said, “due to the high volume of omicron cases that are being processed in our laboratory.”
The University of North Carolina Medical Center in Chapel Hill is also restricting Covid-19 tests to those exhibiting Covid-19 symptoms, as well as university employees and those requiring a test prior to a surgery, according to UNC Health Director of News Alan M. Wolf.
Some localities are now seeing the most new cases they’ve seen the whole pandemic, including Los Angeles County.
On Saturday, the county reported more than 200,000 confirmed cases over the previous seven days — the highest number of cases in one week since the start of the pandemic, according to a news release from the Los Angeles County Department of Public Health. Hospitalizations doubled over the week to 3,200 and there were 135 Covid-related deaths, the department said.
The rise in infections is also hitting Los Angeles’ children hard.
At Children’s Hospital Los Angeles, the positivity rate for children tested for Covid-19 has increased from 17.5% in December to 45% to date in January, according to CHLA Medical Director Dr. Michael Smit.
CHLA currently has 41 patients in-house who have tested positive for Covid-19, and roughly one quarter of the children admitted to the facility with Covid-19 require admission to the pediatric ICU, with some requiring intubation, Smit told CNN on Saturday.
The rise in cases comes just as Los Angeles students are preparing to return to in-person classes Tuesday.

Los Angeles Unified School District, the second-largest school district in the country, is requiring all students and employees to show a negative Covid-19 test result before returning to the classroom.
The baseline test requirement was implemented at the beginning of the school year in August, and the district announced a week ago both the baseline test, along with required weekly testing for employees and students would continue through January, given the current surge.
On Sunday, LAUSD Board of Education President Kelly Gonez said about 50,000 positive Covid-19 cases had been identified as a result of the required testing, stopping those students and employees from enter school buildings Tuesday.

In response to rising pediatric infections, disputes over whether in-person learning is ideal during the Omicron surge and how students can safely attend school are playing out in various school districts this week.
For the week ending December 30, children accounted for 17.7% of new reported cases in the US, the American Academy of Pediatrics said, noting a record 325,00 new cases among children — a 64% increase from the week prior. 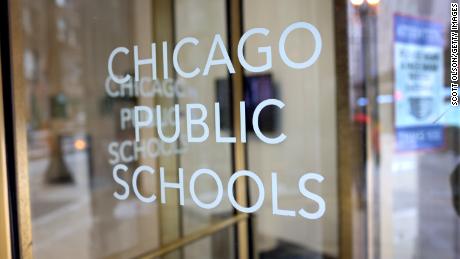 The Chicago Public Schools (CPS) system has canceled classes since Wednesday due to a dispute between city officials and the teachers union over returning to the classroom. The Chicago Teachers Union (CTU) voted Tuesday to teach remotely due to the Covid-19 surge, but the school district canceled classes, saying schools were safe and it wanted in-person learning.
CTU have said conditions are unsafe, citing in part inadequate staffing and testing. They say they want more testing, along with additional mitigation protocols.
The CTU presented a new proposal to Mayor Lori Lightfoot on Saturday which included a resumption of virtual learning for CPS students beginning Wednesday and in-person instruction on January 18 unless health officials determine it’s not safe. City officials rejected the proposal — though it accepted some requests, like providing KN95 masks for all staff and students — saying it looked forward “to continued negotiations to reach an agreement.”
Dr. Julie Morita, the former Chicago health commissioner and executive vice president of the Robert Wood Johnson Foundation, said children and teachers can safely be in the classroom with certain measures, like requiring vaccinations and masks, ensuring good ventilation and testing capacity.
“When those systems are in place, children and teachers can be safely in the school environment,” she said, “but those systems have to be in place.” 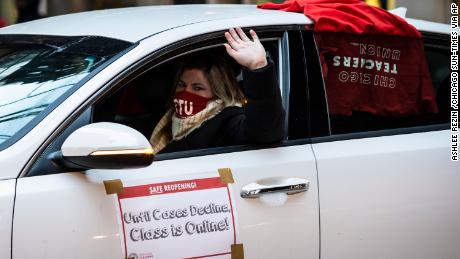 Dr. Richina Bicette-McCain, medical director at the Baylor College of Medicine, told CNN schools could be safe but she believes they are currently “high-risk.”
“Not because of the nature of schools in and of themselves,” she said, “but because although we know what tools are available to us and we have the tools to mitigate those risks, they are not being employed adequately.”
“Students need proper access to testing, we need to give students and staff high quality masks,” she said. “Let’s employ HEPA filters in schools to increase ventilation and increase air circulation.
In Georgia, public school teachers who test positive for Covid-19 no longer have to isolate before returning to school if they are asymptomatic and wear a mask, and contact tracing in schools is no longer required, according to a letter to school leaders released Thursday from Gov. Brian Kemp and public health commissioner Kathleen Toomey.

But Lisa Morgan, president of the Georgia Association of Educators, believes the changes are the “absolute wrong thing to do at the absolute worst time.” Educators want to be in classrooms with their students, she said, “but that should be achieved by keeping people healthy.
“We know that there are increasing cases in our children, there’s increasing hospitalizations in our children,” she told CNN Saturday, “and this action shows a lack of regard for the health and safety of educators, students and our families.”
Source: Read Full Article