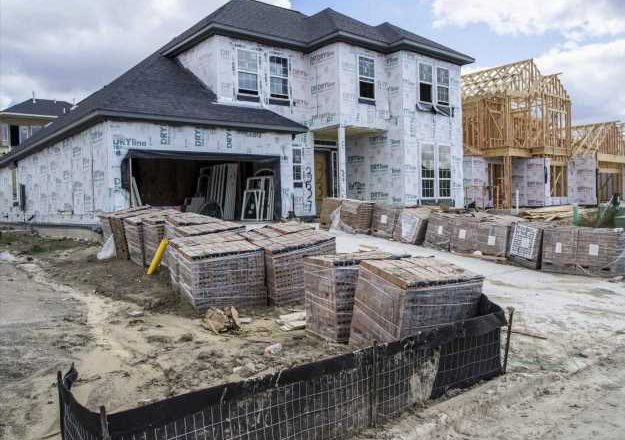 At some point the price is just too high. That may be increasingly the case for potential buyers of newly built single-family homes.

Sales of those homes in November came in well below analysts expectations, down 14% from a year ago. And October's sales numbers were revised to the lowest level since the start of the pandemic, according to the U.S. Census Bureau count.

Despite slowing sales and rising mortgage rates, the median price of newly built homes sold in November rose nearly 19% from November 2020. This came even as the supply of new homes rose. That rising inventory should push prices down, observers say. However, with inventory in existing homes historically low, prices in newly built homes are continuing to jump. The question for now is, how high is too high?

"A hefty correction appears to be due, but the rapid increases in existing home prices — inventory in that market is only one-third the level in the new home market, relative to sales — is putting extra upward pressure on new home prices," wrote Ian Shepherdson, chief economist at Pantheon Macroeconomics in a note to investors.

Prices for existing homes sold in November were up just over 13% year over year, a slight increase from the annual gain in October, according to the National Association of Realtors.

Prices are higher because inventory for existing homes is much lower, with barely a 2-month supply at the current sales pace.

The median is also skewing higher because of the mix of homes selling, which are in large part pricier homes. Even repeat sale price indexes, like S&P Case-Shiller show prices up close to 20% from a year ago.

New homes prices are soaring because there is so little available on the resale market but more because of rising material costs for builders. They're passing those costs onto buyers.

After peaking last spring and falling dramatically over the summer, the cost of lumber is now on the rise again. Its price is now double what it was at the start of November, when the U.S. Commerce Department announced it would double import duties on Canadian lumber in 2022.

While the Realtors are expecting lower existing home sales next year due to rising mortgage rates and continued high prices, builders are more bullish. Builder sentiment rose to the highest level of the year in December (tied with February). It is possible that the sales numbers will be revised, as the Census survey has a wide margin of error.

"We would not be at all surprised to see both the October and November numbers being revised up substantially. In the meantime, the rising trend in mortgage applications probably is a better guide to the underlying state of demand in the housing market," added Shepherdson.

Mortgage applications to purchase a newly built home were down just 2% in November from a year ago, according to the Mortgage Bankers Association. That is far less than the drop in actual sales.

Going into 2022, if mortgage rates continue to rise, as they are expected to do, buyers would have less purchasing power and be unable to afford what is for sale. That could cause builders to lower prices, or at least limit how much they raise them. While a real correction may be too strong a prediction for now, historically prices lag sales by about six months, and sales are coming down.