Riot Blockchain has signed a definitive agreement to acquire the largest North American bitcoin hosting facility, Whinstone US, for $80 million cash plus a fixed 11.8 million shares of Riot common stock.

The total transaction value as of the purchase based on Riot's last closing price of $48.37 was approximately $651 million.

Whinstone is based in Rockdale, Texas on an 100-acre site that hosts Bitcoin mining customers in three buildings totaling 190,000 square feet. An additional 60,000 square foot building is under development as well.

The mining facility hosts three institutional clients and will hit 300 mega watts (MW) in developed capacity by the end of 2021. The company has an "attractive long-term power purchase agreement" as well and Riot hopes to push the facility's power capacity to 750 MW in the coming years.

In addition to hosting revenue, Whinstone also generates engineering and construction services revenue from hosting clients on site, and revenue from the fabrication and deployment of immersion cooling technology.

"The acquisition of Whinstone is the most significant achievement in Riot's growth to date and positions Riot as an industry leader in Bitcoin mining," said Jason Les, CEO of Riot.

"After the consummation of this transaction, we will have created a very clear path for the Company's future growth. Riot will wholly own the largest Bitcoin mining facility in North America, with very low power costs, and one of the most talented development teams in the industry," the CEO added.

The move to acquire Whinstone comes after Riot announced it picked up an additional 42,000 S19j Antminers from Bitmain for $138.5 million on Wednesday.

The miners will increase Riot's bitcoin mining rate by an estimated 3.7 exahash per second (EH/s), giving the company a total bitcoin mining hash rate of 7.7 EH/s.

Riot's stock is up more than 1600% in the past six months alone amid a rise in bitcoin's price and increasing mining capacity at the firm.

The stock traded up 6.58% on Thursday as of 10:23 a.m. ET after the news of the Whinstone acquisition broke. 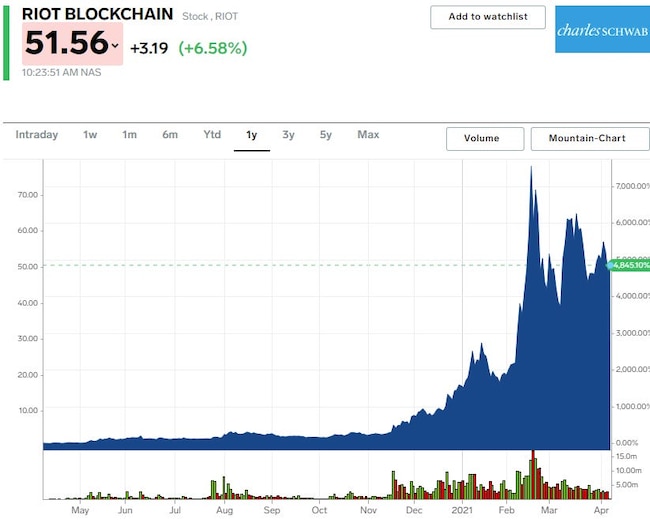